Although dating from the fifties, elements of this feel like they come from a couple of decades earlier. It’s the “truth” – quotes used advisedly – about Hollywood, written by midwest newspaper gal Darla Sloan (Abbott). The conflicting stories heard out there are so contradictory, she’s sent by her boss to find out what’s really going on, through personal investigation. It’s supposedly based on Sloan’s book about her experiences, though this appears completely non-existent outside of the film. At its core, is the usual tension in these exposés, between “Hollywood is a terrible den of sordid iniquity!” and “Let us show you, in great detail, exactly how sordid and terrible…” 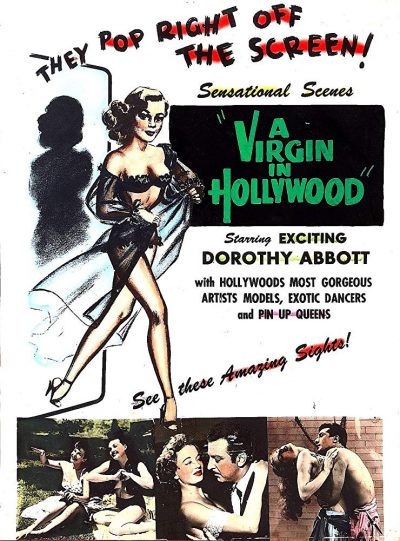 However, “sordid” is… relative, shall we say; this would certainly not get anything more than a PG-13 rating these days. [Spoiler alert: Darla remains firmly attached to her titular chastity through the entire running time] You wonder if its original audience, presumably looking for salacious pleasures, would have been satisfied with the remarkably mild sauce they’re served here. Even the (questionable) hook of having some of the sequences in red/green 3D is little more than a squirt of raspberry sauce on this slice of thoroughly vanilla-flavoured cheesecake. Yet despite the lack of anything much which would offend even the Pope – a line by Darla about feeling like she’s swallowed an electric vibrator is about as risqué as it gets – it’s not unwatchable.

Abbott possesses some pep as your intrepid young reporter, and her adventures have had a bit of thought put into them. [Or perhaps it just seems that way, compared to the other feature on this Something Weird Video DVD, Too Hot to Handle. It’s basically an hour of adult vaudeville, complete with canned laughter so you know when to smile. Wise, since the humour won’t tell you] For example, she stumbles into a ranch in the Hollywood Hills where a photography session under “Tall Tom” (Swift) is taking place, and ends up becoming a model herself. Or tries her hand at dating in the personal ads – clearly, what hasn’t changed in 60 years, is people being economical with the truth in their self-descriptions.

There’s an innocence to Darla’s exploits here that’s kinda sweet, such as her naive inability to spot one of the more obvious female impersonators in cinema history. Far less successful are the stabs at comedy, which fall flatter than some of the models’ chests. It’s hard to argue with the IMDb who, in a rare blurring of the lines between factual information and critical commentary, describe three characters as: a) “Bad Burlesque Comic”(Haynes), b) “Really Bad Burlesque Comic,” and c) “Extra Bad Burlesque Comic.” Not sure I would be able to differentiate between the trio, however. It all ends happily, with her editor coming to rescue Darla from a fate worse than… Well, not quite death, perhaps, but slightly worse than stubbing her toe. Probably. Abbott would go on to bit parts in better films, including South Pacific and Rebel Without a Cause, before an untimely early death. ‘Skippy’ Haynes, however, would never be heard of again…