It’s growing late at the Tilden Morgue and Crematorium. Local coroner Tommy Tilden (Cox) and his assistant, son Austin (Hirsch) are just getting to ready to shut up shop, so Austin can head for the movies with his girlfriend, Emma (Lovibond). Literally on his way to the door, the corpse of a woman (Kelly) is brought in by the cops, found in mysterious circumstance at the scene of a multiple murder – with indications the victims were trying to break out. Intrigued, Austin opts to stay and help his father carry out the autopsy. But the more they dig into the body, the more bizarre the situation becomes. For example, despite no external signs of injury, her lungs are fried and the internal organs scarred. As weirdness begins to infect the mortuary too, it begins to look like cutting open the corpse may have unleashed something for which modern science is unprepared. 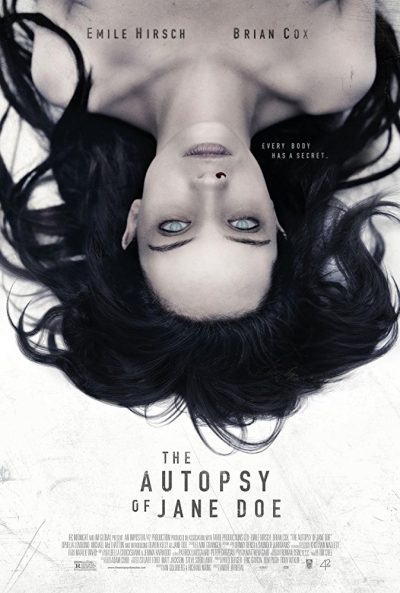 From the director of Trollhunter, this is about as effective and inventive, albeit in an entirely different genre. Øvredal wanted to get away (thank god!) from the “found footage” genre, and instead of exploring the Norwegian wilderness, delivers a taut, claustrophobic work, almost entirely set in a single location. I went in knowing very little beyond the title, and that’s probably the best approach. So, sorry for the paragraph above. 🙂 In ignorance, you’re more likely to be gobsmacked by the forensic discoveries as they’re revealed: more than once, we went “What the fuck…” just before a character echoed that reaction. The pacing is quite exquisite, like watching a jigsaw puzzle be assembled, one piece at a time. I particularly liked the way elements are introduced, like the bell attached to the toe of a corpse, which would subsequently re-enter the plot from another angle, and to great effect.

Cox is his usual solid self, and gives proceedings a much-needed grounding. However, credit is particularly due to Kelly, who gives a remarkably creepy performance, considering she is literally playing dead. If there were an Oscar for “Best Performance Without a Pulse,” she’d be a shoo-in. The second half is a bit less successful, however, reverting to more standard (and thus, less interesting) horror tropes instead of the smarts of the early stages. It is still worth thinking about how much of what’s happening is “real” – the stormy weather, for example, appears not to be – and how much is illusion. Yet even allowing for this, the explanation is rather vague (handwave WITCHCRAFT handwave), and the jump from the scientific method to full-on occult belief feels a little too swift.

Don’t let that put you off though. The pleasures here are to be found in the little details, with a sinister atmosphere that (while your mileage may certainly vary – “sinister” is a highly objective criteria!) I found among the most effectively done from the the last couple of years. The ending hints at further adventures for Miss Doe, and unlike most horror sequels, that’s something I certainly would not mind seeing.