I’ve come to the conclusion that box-office success is a pretty good synonym for “thoroughly over-rated” as far as horror movies go. Good horror movies need to be transgressive. They should be out there, offending the masses and disturbing them, ideally beyond the point of comfort. A popular horror film is, almost by definition, doing it wrong. This can be seen in action, if we look at the all-time top six at North American cinemas, via Box Office Mojo:

They’re a mix of blandly non-threatening chillers (It, Sixth Sense, Beneath) and masterpieces of hype (Exorcist, Blair Witch). The newest entry on the list is A Quiet Place, which parlayed a $20 million dollar budget into about $328 million worldwide, a financial hit by any measure. And, despite a tidal wave of critical approval – currently 95% fresh at Rotten Tomatoes – I found it no less underwhelming than the other five on the list, with the plot particularly problematic. 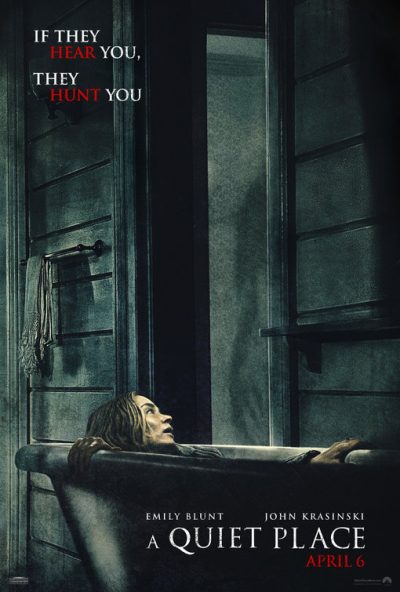 It takes place after civilization has been torn apart by predatory creatures – I presume extra-terrestrial, though like so much in the lazy story-line, it’s unclear – which use their hearing to locate prey. Among the few survivors (indeed, the only ones, from what the film reveaks) are Lee Abbott (Krasinski), wife Evelyn (Blunt), teenage daughter Regan (Simmons), and son Marcus  (Jupe). Regan was born deaf, which is very convenient, meaning the family can communicate through sign language. This allows them to avoid the attention of the monsters in a slightly more dramatic fashion than 90 minutes of passing notes and/or playing Pictionary.

My main issue is the amount of elements like that, apparently existing or taking place purely for cinematic contrivance. For example, the invasion has been going on for well over a year: yet the Abbott’s have made no attempt to relocate to a more secure and/or better sound-proofed location. Which, let’s be honest, would be… just about anywhere that is not a farmhouse in the middle of the woods. Mind you, their priorities are clearly entirely screwed up, since Lee has even managed to get Evelyn pregnant, with all the obvious complications that entails. [I guess the monsters also ate all the Plan B, and can only imagine the sex involved would have been a candidate for the post-apocalyptic version of /r/holdthemoan…]

It goes on. There’s the World’s Most Obvious Nail, on which Evelyn inevitably manages to impale her foot. A corn field – because there’s always a corn field in horror movies. And naturally, the family manage to discover the creatures’ fatal flaw. This is something all the military and scientific experts in the world apparently overlooked, even though it would be the first weapon I’d try against a creature that hunts by sound [spoilerific clue: I’m guessing they’re not Sonic Youth fans…] Really, the whole thing feels like it was written by a child, and not an especially precocious one.

With the limited dialogue at their disposal, the actors resort to the kind of over-dramatic mugging common in the pre-sound era. Even the silence, the film’s “gimmick” (and probably, its best element) is needlessly disrupted by Marco Beltrami’s score, which exists purely because that’s what Hollywood movies need to have. About the only aspect which is thoroughly well-crafted is the monsters, designed by Jeffrey Beecroft: eyeless creatures of nightmare, whose faces unfold like monstrous petals. They’re more fun to watch than a bickering excuse of a family, who consider having a replacement child – for one lost through sheer carelessness – more important than immediate survival.