Long-time friends Vaughn (Lowden) and Marcus (McCann) go for a weekend shooting in Scotland. At first, everything goes swimmingly, with friendly locals – very friendly, in the case of a couple of the local lassies – and plenty of booze. However, the next day, barely has their hunting got under way when things go horribly wrong , Vaughn accidentally shooting a child dead in the woods. Another corpse ensues, and Marcus convinces his pal, against all better judgment, that burying the bodies and legging it is the best bet. These plans for a quick getaway are derailed: turns out rural Scottish fathers are not happy about having their daughters introduced to cocaine-powered sex. Who knew? They’re forced to stay in town, as their victims are missed and concern rises. 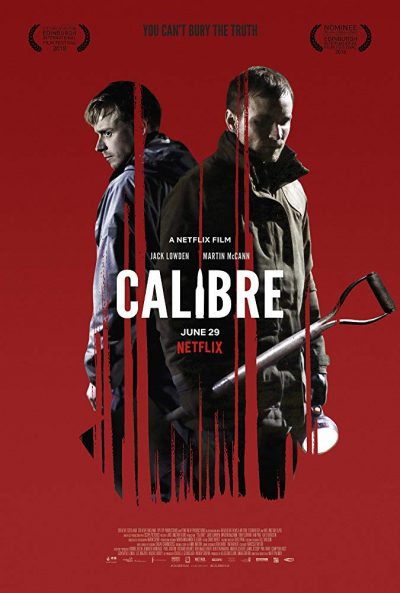 This feels somewhat like it wants to veer into Wicker Man territory, not least when the visitors are compelled to join in a local “festival” to mark the end of the deer-stalking season. I almost expected the local man in charge, Logan McClay (Curran), to start singing Sumer Is Icumen In. It doesn’t quite go that route, opting instead for a more down-to-earth rendition of the “rural nightmare” scenario. As soon as the hunting dogs are brought out to locate the missing parties, it’s clear that Vaughn and Marcus are fucked. The only remaining question, is quite how fucked, and the specific details of the fuckage.

The film seems to delight in setting up red herrings for no particular reason. The festival is one such, and the way Vaughn ends up shooting with Marcus’s gun, is another carefully set up – and seems even to be referenced by the title, with a point being made that the two guns have different bores. Feel free to ignore this, because it’s of absolutely no real significance. Even the looming pregnancy of Vaughn’s wife Anna doesn’t matter in the larger scheme of things, except as a tug on the heartstrings, helping to set him up as the more sympathetic of the two, even declining the advances of his local lassie.

The venison served up as the main dish, however, remains tasty, helped by some ominous photography of the glorious Scottish landscapes – even if it was actually the Border lowlands rather than the real highlands, as it feels like it ought to be. Curran strikes exactly the right balance in his role: initially low-key and welcoming, yet eventually forcing Vaughn into making an awful decision. Yet, it’s hard to argue that Logan is unjustified in ensuring that justice is served, albeit harshly, and he’s positively a restrained voice of compassionate reason, compared to his brother.

It’s starkly moralistic, in that bad decisions lead to bad consequences, and this perhaps separates itself from most of its cousins in the genre by its even-handedness. Rather than being innocent victims, Vaught and, in particular, Marcus have their share of guilt. Does the punishment fit the crime? That’s a thorny question, which you may well be left chewing over, as you are crossing Scotland off your list of potential holiday destinations…