If this film is anything to go by, the concept of oversight appears to be completely unknown in China. Take, for example the secret facility run by the Genge Group, which appears to be engaging in the random splicing of animal DNA. Their latest project involves combining genetic material from a crocodile, a velociraptor and… [rolls two d10, checks chart] a chameleon. This is questionable. The lack of security around the resulting well-camouflaged killing machine? Likely criminally negligent. Allowing the Genge office cleaning lady to wander into the cage and free the creature, which then goes on a killing spree around the corridors of the facility? Well, that’s a sternly-worded letter from the Health and Safety Executive, just waiting to happen. 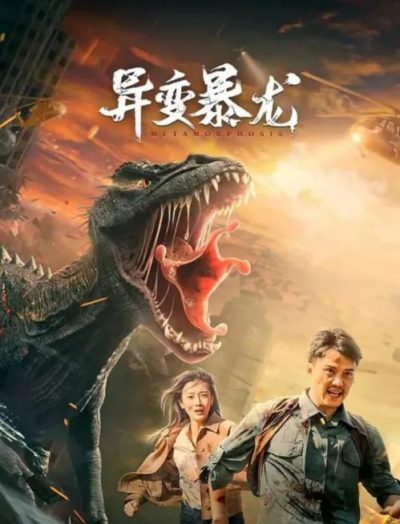 Really, the first thirty minutes of this are as good as we’ve seen in the genre. No time is wasted. We’re straight into the running and screaming, with “endangered wildlife biologist” Liang (Gao) front and centre, alongside Shi Wen (Sun). She appears to be dressed for Halloween out of the “Sexy Scientist” aisle at the local costume store. Meanwhile, another employee has paused to take a luxuriant shower, which is rudely interrupted by the velocichamodile, though it’s more interested in drinking the shower water (top). Eventually, after being chased through the (sparsely populated and unevenly-lit) building, they link up with the rest of the staff, and security chief Captain Zhao, who is about to discover his team’s weapons are not as effective as everyone hopes.

If all quite silly – witness the beast slipping on shampoo – this is well executed and fun to watch, such as the strip-chase sequence, where Shi has to discard her clothes to throw the monster off her (literal) scent. It is a genuinely nice creation, especially when it enters chameleon mode and goes all shiny and transparent. However, the film does lose some impetus when it brings on board a second monster: a giant snake that appears to have bonded with Liang. This gives us something of a Mothra vibe, since it seems to be acting as humanity’s protector, but the animation for it is a bit pants, in comparison to the velocichamodile. Speaking of which, the gene splicing appears to be ongoing, as the creature has now developed a long, sticky tongue with which it can reel in its prey. “All it needs is acid for blood,” muttered Chris.

We don’t get that, but do get a forklift vs. velocichamodile sequence with definite echoes of Aliens. Liang and Shi eventually figure out the animal’s weakness – a vulnerability to low temperatures. This plays into the final scene which does the inevitable thing of setting up a sequel, with the frozen monster heading into the city in a truck… only it’s not so chilled out (again, literally) as everyone thinks. I was sorry to see that being the end. We would be more than happy to see a Metamorphosis II, with the beast rampaging around a city centre, for this was definitely one of the most entertaining entries we’ve seen in the field to date.