I have not seen the original Jarhead. In fact, all I know is a bit a stand-up comic friend did about it. He said he and his wife had a movie night. He picked Jarhead. She picked Brokeback Mountain – and insisted they watched it first. So when they saw Jarhead, it was ruined because all he could see was Jake Gyllenhaal as a marine, with a dick in his mouth.

1) It was considerably funnier when he told it. 2) I am uninterested in Jarhead, which by most accounts appears to be a film more about the tedium of soldiering than the action. It still turned into an unexpected franchise for Universal, with three sequels to this point. By and large, these seem to abandon any pretense of depth, in favour of gung-ho action. I am fine with this, though it must be admitted, I likely would not have bothered with #3, except for my ongoing quest to document the entire career of Scott Adkins. My interest in this lasted almost exactly as long as his character did. Or perhaps the point where we learn the best way to open a recalcitrant safe, is to tip it onto the floor, in a fit of pique. 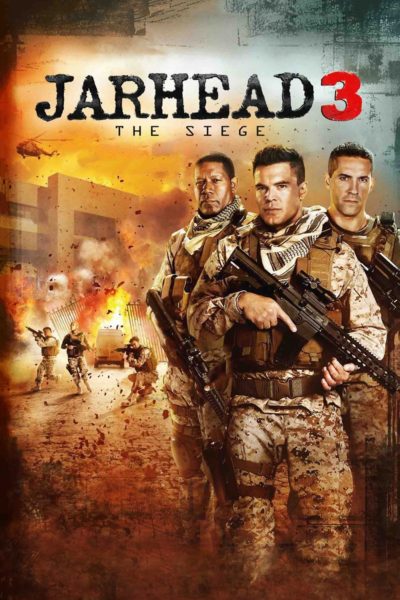 Indeed, there are points where I wondered if this was a sly parody of brain-dead action films, such was the procession of clichéd characters and dialogue. Front and centre is Evan Albright (Weber),  a hotshot new Marine, who gets assigned to a job guarding an embassy in an unnamed Middle Eastern country, under Gunnery Sergeant Raines (Adkins). After the usual bonding, training and Albright being taken down a peg or two, the embassy is attacked by Muslim extremists. It’s up to the Marines to get the ambassador to safety, and also safeguard the phone of a terrorist, which holds information that could help prevent “the next 9/11”. In other words, this is an enthusiastically bullet-ridden knockoff of 13 Hours, which eventually runs out of steam.

I am no military expert, and could not care less about “accuracy” in this kind of film – it’s like the difference between MMA and a kung-fu film. What matters is, does it work cinematically? Unfortunately, the answer here is largely in the negative. This is largely due to a hero lumbered with lines which feel straight out of Team America, like, “You’re just a bunch of fucking pussies too weak to even try hitting anything that might hit you back.” Uh, they are attacking the heavily guarded and fortified embassy, Evan. If there are joys here, they’re around the edges, such as Adkins’s decent American accent, or Jackson’s portrayal of a desk-jockey with hidden depths.

On the other hand, I could very easily have done without Bosco’s annoying, camera-toting comic relief, who adds absolutely nothing, except making you want to side with the terrorists. There’s absolutely zero effort into giving the villains any depth, and while the action is well enough handled, it’s so incessant it becomes more background noise. A rare pause, when the Americans are holed up in a fast-food restaurant called “Freedomburger” (another point of evidence towards my parody theory), is more effective than the near-hour of automatic weaponry which has gone before.