This is another entry in the cycle started by 1971’s Willard, in which a young Bruce Davison played a social misfit who used rodents to kill those who were mean to him. That begat the following year’s Ben, and eventually this, which in terms of overall plot, basically does a global search-and-replace for “rats” with “spiders.” It is, however, decent and entertaining nonsense, that in particular has a memorable finale. It begins with 10-year-old Susan, who is already socially awkward, in part due to her father being the local mortician. Not exactly a family business that wins friends, and gives us the line, “Don’t touch me, you smell of chemicals and death!” Her mother is abusive towards her, though more so towards Susan’s pet arachnid, which gets squished. Susan upgrades to a tarantula, which she uses to terrify her mother to death (above).

This becomes an ongoing theme here. It feels as if the spiders never “kill” anyone directly, presumably because that would make things too easy for the authorities to trace. Hence, we get victims suffering heart attacks, suffocating or even impaling themselves on a broken car window: plausible deniability, spider style. Anyway, after her mother’s funeral, we fast forward to Susan as a young adult, still largely friendless. She gets the Carrie treatment from a guy who says he likes her, only for it to be a ruse, connected to his pals’ desire to lift some coffins from her father’s business, for their Halloween party. Why they can’t just go to the Spirit store like everyone else, I dunno. 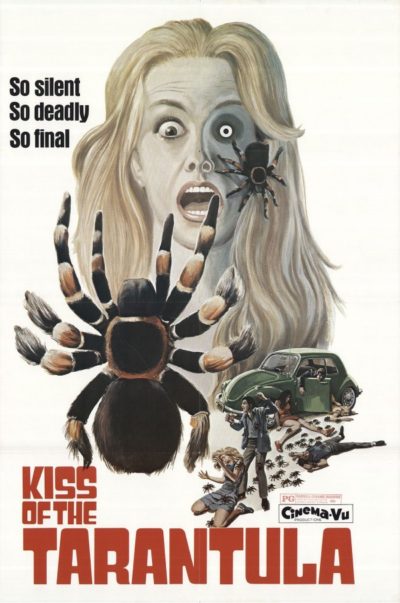 After they’re disturbed by Susan, they rough her up a bit though, as with her late mother, it’s Susan’s eight-legged furry friends who bear the bulk of their wrath. Such cruelty must not go unpunished, and so she sets about her revenge, first tipping a pile of spiders into the perpetrators’ car, as they try to enjoy a nice drive-in double feature with their girlfriends. Much death ensues. One of the girls, Nancy (Landon), who survives is in a state of shock and unable initially to explain what happened. When she has recovered enough to talk, she makes the mistake of revealing her suspicions about Susan to local police chief Walter Bradley (Macias).

This proves a fatal error, since Walter is both Susan’s uncle, and has a deeply creepy obsession with her. It’s therefore not long before Nancy is found, strangled to death in the woods, and Walter goes to Susan while her father (Wallner, whose main attribute is towering over everyone else in the cast) is away. As well as bonding over them both being psycho, he also wants to engage in a little quality family time, if you know what I mean and I think you do. Susan, in an unexpected display of morality, pushes him away. Literally, with Uncle Walt toppling down the stairs and being left paralyzed at their foot. What’s a young woman going to do in a mortuary, when there is an unwanted dead body to dispose of?

Subsequent events unfold at excruciating length, almost in real time. Munger also let things proceed in near-silence, which adds significantly to the creep factor, as Walter gets his just deserts. That said, Phillan Bishop’s harshly abrasive electronic score – some way ahead of its time for the mid-seventies – is generally more effective than most low-budget horror. It probably reaches its peak during the sequence where Susan releases a slew of spiders into an air-duct, in which the young man who “liked” her is carrying out maintenance work. It’s another scene where the director’s willingness to let things unfold at their own pace, works for the film, though I can see the point of those who have argued this film is slow and/or boring. It’s deliberate: you can’t rush these spiders.

I found most of the performances to be… Well, while “good” could be a stretch, I’d certainly call them appropriate. Ling is off-kilter to the right degree as Susan. She’s a very restrained psycho, with an inner sadness which makes her quite sympathetic. You don’t have to be a card-carrying member of PETS to be on her side, especially with the creepy uncle to hand. As with most of the cast, it seems that this was Ling’s only film or television role, with no other IMDb credit listed. The exception there is Macias, a Mexican actor who had a decent TV career, mostly (and as here) under the Anglicized  name of Eric Mason. This was one of his biggest roles, and he does a solid job as the upstanding paedophile member of the local community. 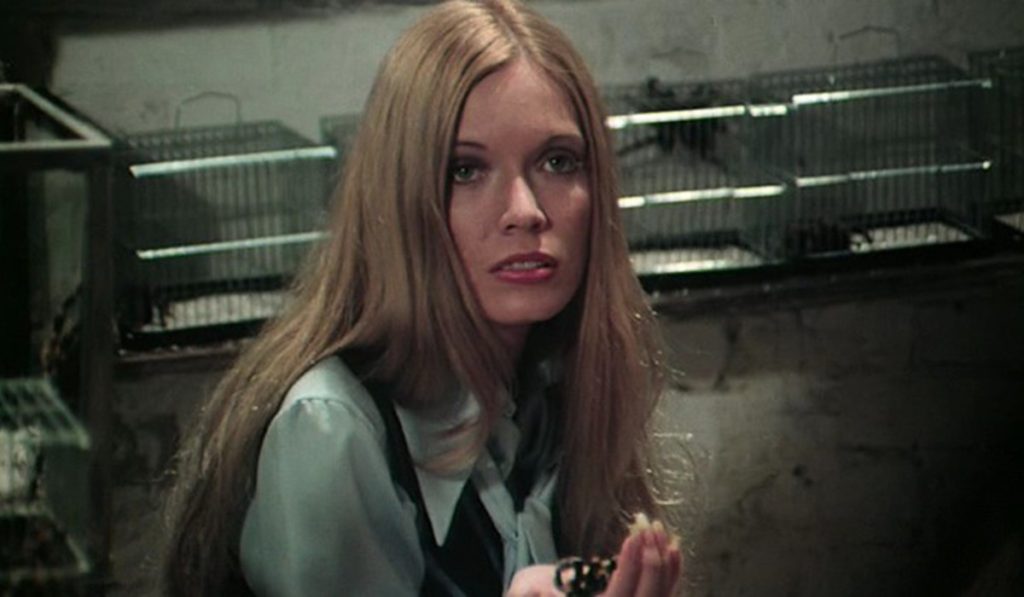 Naturally, to what extent this affects you will vary, depending on your feelings about spiders. I have no particular fears in this area, but as an Arizona resident, have heard enough stories – particularly about the brown recluse, whose venom can cause necrosis – to develop a respect for them. The ones here are stately rather than scuttling: in zombie terms, they’re more Night of the Living Dead than 28 Days Later, and that does limit their threat. Still, in a confined space, such as that air-duct, I’d not be happy about finding my way out blocked by a horde of them, slowly making their way towards me.

The film was recently done by the Rifftrax crowd, which brought it a new audience, albeit one more intent on poking fun at it. That’s a bit of a shame, as I found this perfectly fine on its own merits, when taking into account its low-budget nature. I’ll stress again that you do have to be in the mood for something on the languid end of horror: jump scares are not this thing’s bag. However, it also deserves credit for giving its full support to a heroine responsible for the deaths of a number of people, and without bothering to provide even a token cop out to justice at the end. It’s as if Psycho had ended with Norman Bates lighting up the VACANCY sign at the motel once again.