The online coverage of this film is more or less a Rorschach test of the viewer’s political leanings. There’s a reason 61% of IMDb ratings have scored it as a “1” or a “10”. It feels like most reviewers react based entirely on how much they agree with the message. Which is fair enough, considering it’s difficult to see this cinematic polemic changing many opinions. But I’m going at least to attempt to put that to one side, despite the unwelcome presence of a cameo from Alex Jones. Let’s look at this as just a low-budget action movie, directed by Chuck Norris’s son. [Obligatory: Chuck Norris winked at a woman, and nine months later, she gave birth to Mike] 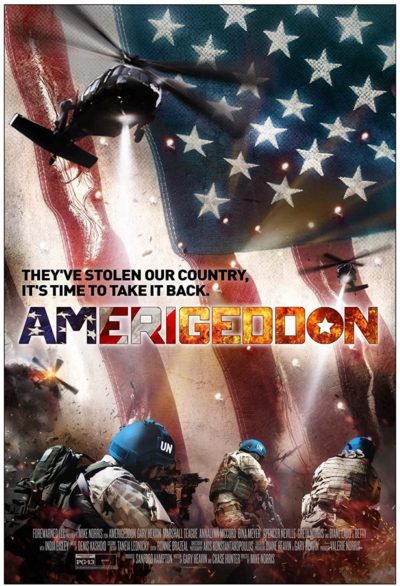 Its nearest cousin is something like Red Dawn, with a brave band of freedom fighters standing against the tyranny which has engulfed the United States. Except, unlike Dawn, the call in this case is coming from inside the house, with the deep state controlling the President, and declaring martial law after a false flag EMP event affects the entire continental United States. The army comes under United Nations control, except for patriotic rebels like Lt. Brandon Lane (Neville), who hightails it to a Texas compound run by Charlie Grey (Heavin). He has been preparing for just such an eventuality, and now it has come to pass, is holed up there with friends and family, until the New World Order’s forces – Russian led, naturally – show up on the ranch’s doorstep, demanding they hand over Lane as a deserter. Something something cold dead hands.

The main problem here is likely Heavin, whose acting resume consists of three films… each of which he produced, using a fortune made in the fitness business. I’m not saying he bought his roles, but I’ve seen cardboard boxes with better screen presence, and his delivery never even reaches wooden. He should leave things to professionals like Ladd, whose 60+ years of experience shows. I’d also like to have seen more of AnnaLynne McCord, whose Sam comes over almost like a female version of Burt Gummer [I trust you know who that is, or we simply cannot be friends]. But the main problem is a script trying to tell too many stories, and consequently doing none of them proper justice.

Had the movie focused on, say, just Lane, this could have worked, since Neville has some charisma, a bit like a young Casper Van Dien. It does best on the odd occasion when things are kept small, at a personal level to which everyday folk can relate. [Though the scene in a store with stripped shelves, seems almost prescient in the wake of what happened early in COVID] The more it tries to portray events at the federal level or above, the more risible it becomes. Similarly, the large-scale air battle which forms the movie’s climax is neither large-scale, nor barely a battle. As is inevitably the case, this is neither as good as its supporters believe, nor so bad as its detractors think. It’s just mediocre, albeit a nostalgic throwback to a kinder, gentler era of conspiracy theories. At least, relatively.