To start with the “festival programmer” hat on, at 50 minutes, my first reaction was that this is an awkward length. It’s too long to be considered a short, yet comes up below feature length. But after watching it, I think it’s about right. I’m hard-pushed to think of any way it could coherently be shortened, yet I suspect a full-length movie might become a bit of a slog, considering it’s mostly two people having a conversation. There’s something to be said for a film being the length the material demands, no more and no less.

It takes place after an apocalypse of some kind, which appears partially military, partially medical. Diane (Slade), a young, aspiring film-maker, awakens to find herself in an underground bunker, surrounded by the dead and near-dead, and with no real memory of previous events beyond what was recorded by her camera. Exploring the space, she is “rescued” by Colonel Gore (Young), a soldier who appears to have taken Dr. Strangelove as a training video. Needless to say, their subsequent relationship is almost perpetually tense, with wildly conflicting world views and opinions on how to address their situation. 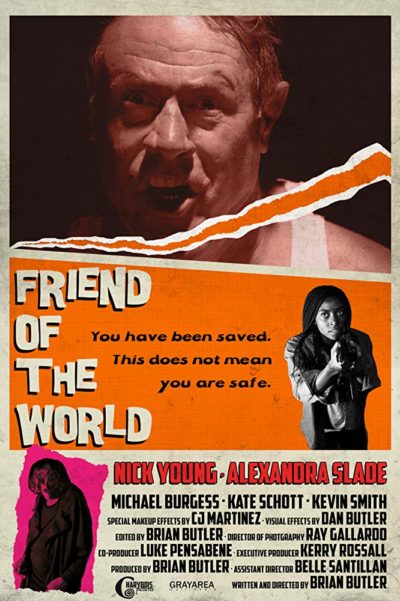 This feels like it could be an adaptation of a stage play, with these two virtually the only characters to speak, exchanging verbal punches around the confines of the bunker, on their way to a conclusion which has a sense of inevitability about it. It felt as if Gore was trying to “win”, by provoking Diane into abandoning her own ideals and joining him in the dark side. Yet, despite his cigar-smoking, vest-clad appearance, the character speaks with some eloquence. “Well, he does have a point there,” I found myself thinking on occasion – despite the tattered remnants of civilization being all that’s left, due to the actions of his ilk.

While much of this is grounded in apparent reality, some sequences seem to operate by different rules, such as the sequence where another survivor craws into their space, constructs an IED and blows himself up with it. Such elements sometimes left it feeling obtuse for the sake of artistic pretension, though this is clearly a more experimental piece, rather than a direct narrative (as in the not dissimilarly themed Shellter). It’s filmed mostly in stark, effective black-and-white, which makes the occasional bursts of colour, in flashbacks and to a lurid version of the world outside, all the more effective.

To be honest, the first few minutes had me wondering how even its relatively brief running-time could be sustained. Yet I was genuinely surprised when the end credits rolled, since I didn’t feel fifty minutes had passed. There are bumps along the way, with not all the choices pulling the film in the correct direction; the artistry sometimes gets in the way of the art. Yet it’s one which has stuck in my brain since I watched it. I start most reviews here almost immediately; I’ve sat on this for 48 hours, to try and get my mind around the odd mix of horror, drama and black comedy for which it aims. That alone indicates this is different, and if “different” is what you seek, Friend definitely fits the bill.