“Is this a Michael Bay movie?” asked Chris at one point here. I think it was when the double-decker bus was having its duel with a chemical tanker, as they both hurtled down the motorway. While not a Michael Bay movie, it often feels like one. That’s quite a remarkable feat given a budget of only $8 million, and that money ran out twice during filming. Even more amazingly, it actually manages to make Middlesbrough look interesting. Admittedly, the makers were probably helped by filming in Bulgaria: the crap jokes there just about write themselves (example: what’s the difference between Bulgaria and Middlesbrough? One’s a poverty-riddled third-world hell-hole, and the other is Bulgaria). But with a solid cast of B-listers, this was the most entertaining time I’ve had watching a film for a while. 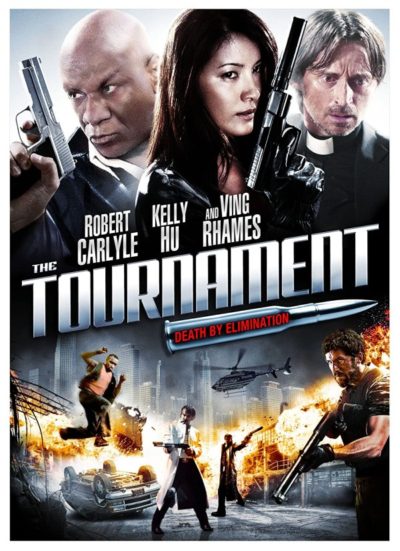 This is probably because the film warmly embraces the stupidity of its central idea. Every seven years, thirty of the world’s top killers are thrown together in a poverty-riddled third-world hell-hole, and fight to the death, for the amusement of rich degenerates, overseen by show-runner Mr. Powers (Cunningham). This time, the competition is in the North-East of England, with participants including reigning champion Joshua Harlow (Rhames), who is out to find the colleague who killed his wife, Asian assassin Lai Lai Zhen (Hu), and unwilling entrant Father Joseph MacAvoy (Carylle). He simply drinks a coffee containing a tracking device dug out of another entrant, so is literally on everyone’s radar; they all have hand-held trackers identifying other players nearby.

Carnage ensues. Hoo-boy, does it, right from the start where Harlow wins the previous competition with the aid of a captive bolt pistol. Also, the trackers explode under… certain circumstances, covering everything and everyone nearby with a fine mist of goo. But there’s plenty of variety in the action, from the motorway duel mentioned above, to a fine hand-to-hand fight in a church between Zhen and Russian contestant Yuri Petrov (Scott Adkins). It is just a shame the bulk of the competitors are quickly disposed of in a mid-film montage. This is one of the rare occasions where I wanted a film to be longer, to give them all their moment of carnage.

Just do not squint at the plot too hard, for it is so heavily stacked with contrivance, it would collapse under the gaze. For instance, there’s not a single genuine cop to be seen, despite all the chaos, carnage, strip-club shootouts and exploding vehicles. Then again: it is Middlesbrough… Probably counts as not much more than a somewhat busy Saturday night. The trackers also behave exactly in the way needed for the film’s function, rather than with any technological plausibility, and the characters are one-note confections (likely another reason why they should have had six instead of thirty). However, there’s simply so much unadulterated fun here – presuming your idea of fun involves brutal, excessive violence – that I’m prepared to cut it whatever slack is necessary, all the way to the last exploding body.