First Lord of the Rings, then Game of Thrones, have a lot to answer for. Both by inspiring a whole slew of fantasy epics, and for raising the bar in terms of acceptable production values. There is a point in cinema history where what Dragon Warriors provides could have been tolerable. I’d estimate that point falls somewhere between Train Pulling into a Station and “Wait a minute, wait a minute. You ain’t heard nothin’ yet!” In a post-Minas Tirith world, however, it feels woefully inadequate. That isn’t the film’s sole problem. It begins with what can only be described as a massive loogie of exposition. Because, it turns out, this is actually a sequel to something called Knights of the Damned. It’s a fact about which the cover remains curiously mute, preferring to tout dubious connections to Game of Thrones and Harry Potter. [Chris Newman isn’t even listed on the film’s IMDb page] 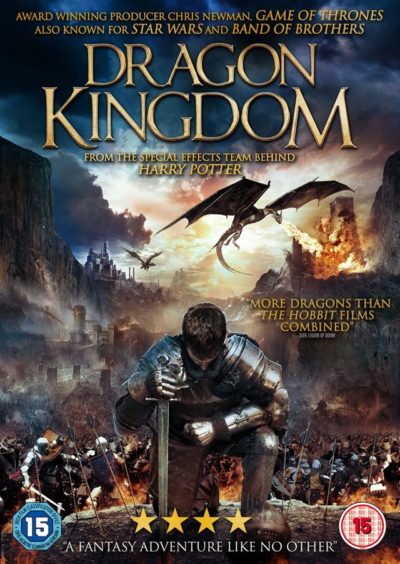 Nor, despite the title and sleeve, are there copious amounts of dragons. One does show up to reclaim an egg, then apparently collects its cheque and flies off. This is instead mostly a slog through a darkly enchanted forest, seeking to bring Princess Elizabeth (Dyson-Smith) to some castle of sanctuary, because her brother Favian (a genuinely terrible performance from Jon-Paul Gates) is plotting a palace coup against their father. Shepherding her are warriors including Richard (O’Hennessy), George (Loyd-Holmes) and Mascara, Princess of the Eye Shadow (Phythian). After fending off the low-budget fantasy version of zombies, they end up getting captured by this film’s version of orcs. Who are blue, which had the unfortunate effect of making me think of Smurfs gone bad. This is where proceedings effectively grind to a halt, until a frankly ridiculous finale, which offers no more an ending than this provided a genuine beginning. I must say though, I was genuinely impressed the leader of the orc-a-likes could actually still swing a sword, considering the mask, spiky shoulder-pads and other stuff attached to him (top).

It’s an entirely unconvincing depiction of a fantasy world, with the makers using whatever they could get their hands on as locations and set dressing. The results have no stylistic continuity, and the harsh video used to record proceedings, does the setting no favours either. I will say, outside of Gates, the performances are okay. Dyson-Smith occasionally demonstrates the charisma you’d expect from a royal personage, and despite my snark, Phythian is an effective warrior woman. You need to look hard for such positives, in contrast to negatives which are blindingly and repetitively obvious. These would include an obvious lack of manpower, with the battle scenes likely topping out at about twenty to thirty people – hardly enough to tilt the balance of national power. For this to work on the budget available, it would need a lot of wit, heart or preferably both. It’s just not possible to take the movie seriously, as it wants – and needs – the viewer to do.