Ah, yes. With that title, you will understand why this went straight to the head of the watchlist. Freud would have a field-day with this, and the “My anaconda don’t want none” jokes are writing themselves. However, I am compelled to warn viewers of the at least somewhat false advertising going on here. For the location is actually the Haixi Flight Attendant Aviation College, a training establishment for trolley dollies. I use that term, since the ones here a) are 100% female, and b) it’s obvious that few of the current intake were selected on the basis of intelligence or courage. A nearby snake farm has been using dodgy growth hormones to speed up production, and when one of their monster beasts escapes, on the day of the college’s graduation party… Well, fill in the rest of the plot yourself. 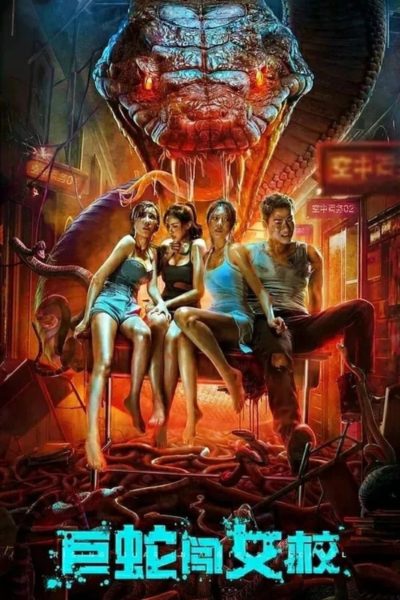 It does put a little effort into its characters. We first meet student Li Meng Na (Peng) as she causes her class to fail a test, because she goes back to help a struggling colleague, which earns her the enmity of class bitch Ma Su (Shi), who is trying to sneak her rich boyfriend into the school. Meanwhile, poor but honourable security guard Liu Chao (Zheng) is putting in his best efforts at his humble job, under the guidance of his boss, whom he calls Second Uncle (Pang). Obvious question, what happened to First Uncle? Was he – picking a scenario out of the air here – eaten by an over-sized rampaging reptile? With help delayed by a convenient landslide, it’s mostly up to Lui and Li to try and stave off the monster’s attacks.

If the scenario is nothing new, the execution is vigorous and there are some nice set-pieces, such as Liu and Uncle crossing a high-wire between buildings, over a resting giant snake, or a sequence in a cold-storage locker, making use of the fact that snakes sense their prey by their heat. It all builds to a severely pyrotechnic finale (top): fortunately, the school was stuffed to the gunnels with fireworks for the graduation ceremony. As we all know, the best fireworks were always the Chinese ones, with instructions you could never understand, except for something about “30 metres”. The only issue is, it’d have been amazing if the climax had used real fireworks, not CGI ones, though given the fiery results, I guess safety was an understandable concern.

This is a solid effort, not least because the creature has a particular fondness for snacking on the unpleasant and annoying characters. It’s not much of a spoiler to say that survival chances here are largely in line with likeability, even if there’s not much development to be found. Second Uncle is likely the only character changed by his experience. Well, except for the ones changed into dinner, naturally. It ends in a heartfelt plea: “We should vigorously advocate the caring for creatures on earth and co-exist peacefully with them.” After the preceding ninety minutes of snakey carnage, I can’t help feeling the film may be guilty of sending out mixed messages.