This is an adaptation of the book Gun Down by Brian Garfield, who also wrote the novel which became Death Wish. You cou;d probably tell, with this also being the story of someone obsessed with the pursuit or revenge. Here, though, that man is the villain rather than the hero. In 1909 Arizona, half-Indian outlaw Zach Provo (Coburn) busts out of a chain gang from the Yuma Territorial Prison, with a hand-picked group of similar tough nuts. He heads to Tucson, intent on taking revenge on recently retired lawman Sam Burgade (Heston). Provo blames the ex-sheriff, not just for putting him in prison, but for the death of his Navajo wife in the shoot-out which preceded capture. 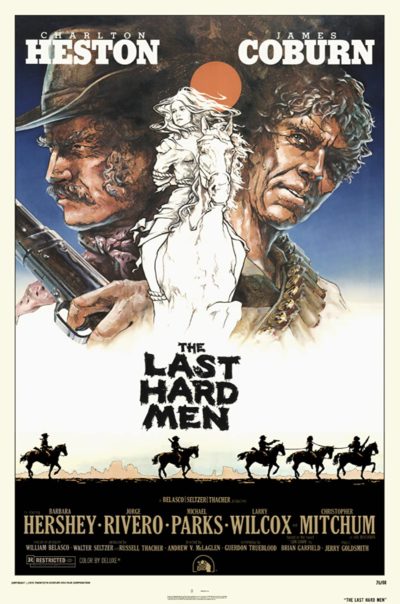 Initially, it’s a game of chess between the two men, with Burgade setting a trap for Provo, only for the escapee to side-step it. He instead abducts his target’s daughter, Susan (Hershey), knowing that will lure Burgade into following, and heads onto Indian land where the white man’s law is limited in its jurisdiction. Proceedings kinda grind to a halt at this point, in favour of much trudging around various bits of Southwestern scenery, as Burgade closes in on Provo – which is exactly what the latter apparently wants, so he can enjoy his vengeance. That said, you have to ask why he didn’t just break into Burgade’s house in the dead of night, rather than leading him in a lengthy tour of the local desert.

There’s an authenticity to this, with the film being shot in various Arizona locations including San Manuel, Rio Rico, Mammoth, Gates Pass, Winkelman and Nogales, as well as at Old Tucson Studios. I can’t help thinking that the cast, which also includes Michael Parks and Christopher Mitchum, deserve better. It might have helped had Burgade and Provo shared more than one scene. Director McLagen, while born in England, was a veteran director of Westerns, including McLintock! and Chisum with John Wayne. However, here he seems more intent on aping Sam Peckinpah with his use of slow-motion, in particular during a rather rough scene where Susan is raped by two of Provo’s men (a factor in the film initially receiving an ‘X’ rating).

These elements, as well as the focus being split between protagonist and antagonist, leave this feeling it could have been a decent Spaghetti Western, though there isn’t anywhere near the same sense of moral ambivalence. I suspect the likes of Sergio Leone might well have shown us Provo’s wife being gunned down, explicitly depicting his motivation, rather than just giving us Burgade’s almost casual description of why Provo wants to kill him. Again, the separation between the two leads works against the film, for this is the kind of purpose which is definitely up-close and personal. Yet only in the final few minutes is that reflected on screen. Though both Coburn and Heston give their unarguable talents, it wasn’t enough for me, to watch them acting separately.