A mere thirty-three years after the original, Charles Band finally gets round to producing this not quite a sequel, not quite a reboot, to his pissed-off resurrected witch story. Even allowing for three decades of inflation, I suspect the budget here was a fraction of the 2019 version, and even at less than an hour long excluding credits, this is very much a chore. My first attempt, I fell asleep and missed about a half-hour in the middle. I dutifully rewound it, only to realize I was right enough the first time. This is a 15-minute film at best, so even at its relatively abbreviated length, still has massive problems of pacing. 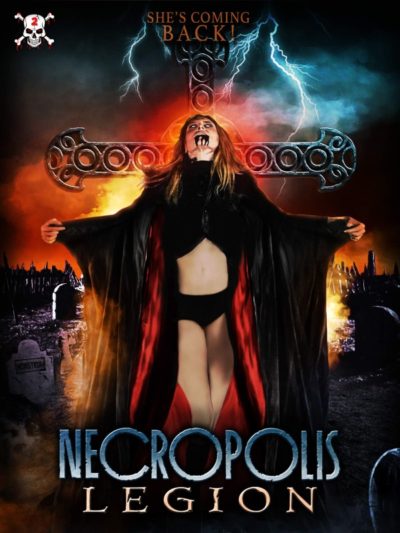 It begins with a prologue, apparently set hundreds of years ago, yet (as top) after the creation of the Victoria’s Secret catalogue. Evil witch Eva (Chappell) has her Satanic ritual interrupted by her husband, Maynard Gandy (Lopez), leading to her being sent into a dormant state. Fast-forward to the present day, and occult writer Lisa (Duke) shows up at the Gandy farmhouse for a spot R&R – that being Research and, um, Riting – despite the dire pronouncements of doom made by local Zia (Lowry) during a book-signing. Naturally, it just takes some broken glass for Lisa’s blood to be spilled, dripping into the cellar where it revives Eva’s soul in low-rent Hellraiser style. Cue slightly nightmarish visions, using every visual trick Alexander has in his shareware arsenal, before Zia turns up to say “Told you so!” and offer moderately helpful advice on how Lisa can defeat the sorceress.

There are really only three reasons to watch this. One is the veteran presence of Lowry, who manages to keep a straight face somehow. I trust she enjoyed the dinner at Taco Bell her salary here likely covered. The other two are Eva’s tits. If you recall the previous film, their equivalents were memorable for the witch having six of them. Here, there are just the usual pair. However, they have mouths in place of nipples. Sadly, this doesn’t mean we get to hear Eva singing three-part harmony, all by herself. To make up for this, we do get to see them barfing up milk into her acolytes’ mouths. So, there’s that…

The problem is, none of these come anywhere close to filling the hour, though the orally-adept breasts did make me wonder if this was a dry-run for Verotika. It’s almost 20 minutes before Lisa shows up at the farm. We get a sequence, lasting more than six minutes, of her driving there, and wandering slowly through every room, before ending up at the graveyard in the back, containing the most fake, polystyrene gravestones I’ve seen outside the remainder aisle at Walmart. This sluggish approach persists almost the entire way: we’re at 47 minutes in when Lowry finally arrives at the farm, so there’s barely a dozen minutes left for what passes for a climax to happen. Or not happen. The film’s coda strongly suggests the latter, and I’d be fine if the whole thing was similarly, some kind of warning from my subconscious. Sadly, the existence of this review seems to prove otherwise.