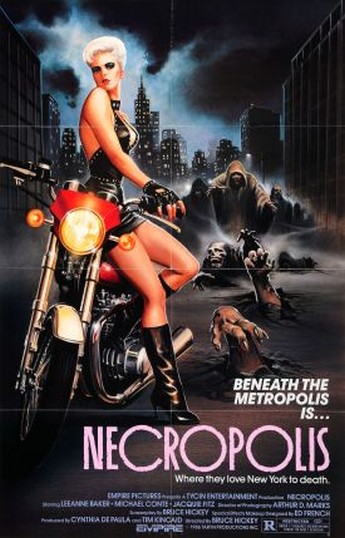 Ah, the eighties. Got to love an endearingly-daft concept, executed with an absolutely straight face, in a welter of period fashions, which leave it looking nothing but utterly dated. It starts off with a witch in 1686 “New Amsterdam”, the caption apparently not having got the memo that New York changed its name 20 years previously. She is making efforts to gain eternal life, which appear to require acting like you’re in a bad hair metal promo video, only for these to be derailed by a conveniently-passing preacher. 300 years later, she is reincarnated as a pissed-off punk chick, intent on completing her ritual.

Apparently this now involves sucking the souls out of people, growing four extra breasts, and using them to suckle her minions with psychic energy and ectoplasm. I swear, I am not making this up. The trail of corpses bring the attention of a local detective (Conte, apparently trying, unsuccessfully, to channel early Al Pacino), a NPR reporter (Fitz) and, naturally, a modern-day preacher (Reed), who is about the only person with a clue as to what the hell is going on. And that probably includes anyone in the audience.

The poster, with its R-rating (“Under 17 requires accompanying parent or adult guardian”), implies that this got some kind of theatrical release, which may be the most implausible thing of all, because this plays like one of the later, straight-to-video entries in the Witchcraft series, perhaps directed by Abel Ferrara in exchange for drug money, given the heavy flavour of New York grime present here. Baker in her modern guise looks like a low-rent version of Brigitte Nielsen; the 17th-century version bears an odd resemblance to Daenerys Targaryen, which is perhaps more appropriate. It really needs someone with a lot more presence to carry the role off; Baker brings not much more than a pair of cheekbones to be drenched in copious eighties rouge, though has only the second-worst hairstyle inflicted on any actress in the movie [trust me: you’ll know it when you see it].

Reed is probably the best thing here, playing like a black version of Peter Cushing as Van Helsing, and managing to get the more ludicrous chunks of exposition over, in a way that’s almost credible. Keyword there: almost. This never escapes the bargain basement which spawned it, eventually dying in a climax which is utterly ludicrous, and a coda that’s even worse. Still, for all its faults, and those are plentiful, I didn’t fall asleep. However, I might have wanted to at some points.