Three teenage reprobates are dropped off in the middle of nowhere, being sent on a hike across the Scottish Highlands to earn the Duke of Edinburgh’s Award, as a last chance to avoid expulsion from school. There’s rapper DJ Beatroot (Juneja), faeces arsonist Duncan (Gribben) and aspiring fish-packer Dean (Gordon). They’re teamed up with straight-laced Ian (Bottomley), who genuinely wants to complete the award. It’s not long before they discover there are bigger threats than the local insect life. Namely the Duke (Eddie Izzard) and his wife, who see the young quartet as everything wrong with current society, and are intent on “culling the herd”, as heads of the local hunt.Meanwhile, the group’s actions lead the local cops to believe they have been invaded by London gangsters. Or terrorists. Or paedophiles. 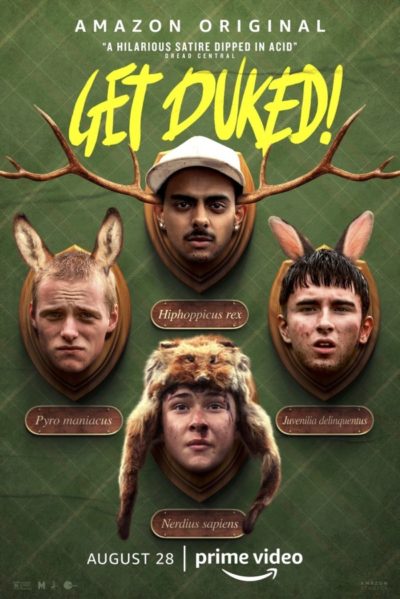 One almost wonders if Doff is a pseudonym for Nick Frost, since this is roughly 50/50 Attack the Block and Hot Fuzz. combining the urban, youthful aspirations of the former, with the rural resistance to modern life and psychopathy of the latter. It doesn’t work as well as either, mostly because the protagonists here are such idiots, it’s not long before you start to wonder if the Duke has a point. The director’s background is in music videos, and you can tell. The film almost reaches peak cringe with a performance by Mr. Beatroot in a barn, which includes James Cosmo, off his face on rabbit shit. I say “almost”, because later on there’s Ian lecturing the Duke on how his generation ruled the world. All that needed for completeness was a “HOW DARE YOU!” Actually, maybe there was one, and I was just rolling my eyes too hard to notice.

It’s not entirely without merit though. I LOL’d at one joke involving an IED, and I also engaged more with the rural police, led by Kate Dickie from the very good Red Road. Unlike the teenagers, she and her colleagues actually seemed like real people. They want to capture the “terrorists” to save their police station from being closed due to cutbacks, but the local superintendent (Prevenge‘s Alice Lowe) insists they investigate the far more pressing problem of a local bread thief: “There’s babies out there who’ve never even seen a baguette.” I wish the film had concentrated on them, as they feel about the only characters the movie genuinely likes.

Good use is made of the locations, even if it seems they didn’t venture north of Crieff, which is the Highlands about as much as the White Cliffs of Dover is Great Britain. The ending is unfortunately weak, feeling too much like something the Monty Python crew would have rejected. Imagine their Upper-Class Twit of the Year sketch ending with a giant foot descending, and you’ll be more or less there. It feels as if Doff wanted to make a horror-comedy, then decided to abandon the first genre, and forgot to fill in the resulting blanks.