This follow-up to Attraction includes many of the same cast, and in some ways is even more spectacular. Yet it is ultimately less successful, mostly down to lackluster plotting which seems to exist to serve the special effects, rather than the other way around. It begins three years after the spaceship crashed into a Moscow suburb, with a quick montage of previous events. These include the connection between Julia (Starshenbaum) to the alien Khariton (Mukhametov), and the tragic end to their relationship. Now, Julia is helping the government utilize the advanced tech obtained from the crash site, under her father General Lebedev (Menshikov). Though I use “helping” in the same sense as, “helping the police with their inquiries.” 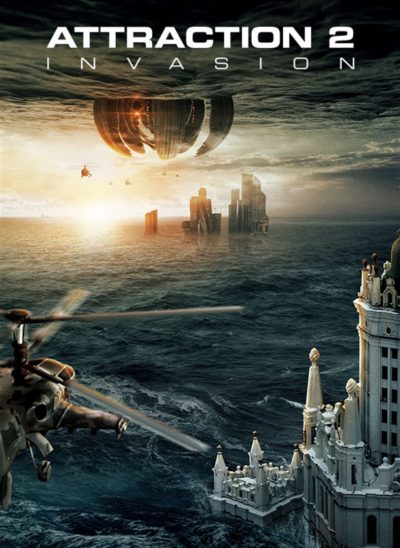 When on a typically Russian night out i.e. heavy binge drinking, she’s startled by the return of the supposedly dead Khariton. He has some bad news: the artificial intelligence which runs his craft has decided Julia is a threat. Mankind cannot get their hands on the advanced technology, and so she must be killed. Khariton won’t stand for that, so is rebelling against the AI, as it uses deep fakes and its ability to control social media, to frame Julia as a dangerous terrorist. Once she is cornered, its other talent, manipulating water, is used to create a massive dome of water surrounding the area. This will be gradually shrunk, eventually drowning Julia, and anyone else unfortunate enough to be under the dome.

Yeah… I have questions. So. Many. Questions. Not the least of which is, how is Khariton back from the grave? Part of what gave the preceding film its emotional pull was the sense of loss, with the visitor heroically sacrificing himself to save Julia. Turns out, that was all some kind of prank. Not only was this barely an inconvenience, he then ghosted her for the following three years. Alien boyfriends can be dicks too, it appears. Then we have the super-intelligent AI. With all those powers at its fingertips, and technology behind our ken, it couldn’t come up with a better plan than this strikingly convoluted one, involving dumping ten billion gallons of water around a few city blocks, then slowly squeezing?

At $15 million, while the budget is more than double that of the previous installment, it’s still small by Hollywood standards, and Bondarchuk again does a good job of squeezing every penny of production value of the available resources. The scenes of the water sweeping through the streets of Moscow are as good as any you’ll see, and some of the chases, with Khariton and Julia trying to escape from her father’s forces, are also very well-staged. The problem is, with the lack of any emotional investment or stakes – death being something you can write around, if the box-office wills it – none of it has any impact. You’re left with something little more than moist disaster porn, albeit of the adequately well-crafted kind.