A little bit like The Guardians, this is an example of Russian genre cinema getting way more bang for its buck – or rouble. The budget on this 132-minute alien encounter epic is a mere $6.3 million, which is less than one-third of that for The Nun, an entry-level horror title out of Hollywood. I suspect most of it was spent on the spectacular early sequence (shown below) in which an extra terrestrial ship, damaged in orbit, is shot down by the Russian military and crash-lands through Moscow. 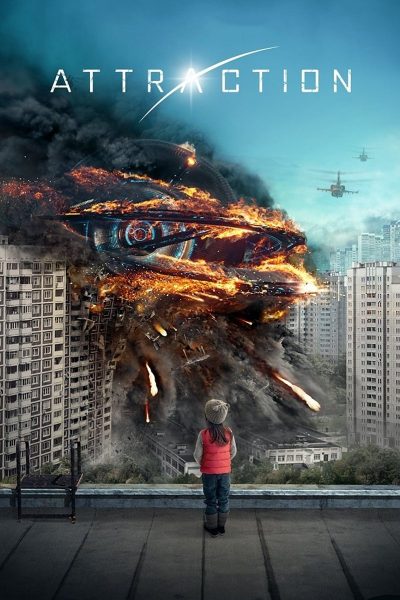 Despite initial qualms, as well as complaints from the disgruntled local residents who are displaced by the resulting no-go area, it turns out the aliens are only intent on repairing their craft and getting back into space. Teenager Yulia (Starshenbaum) and her boyfriend Artyom (Petrov) are part of a group that enter the forbidden zone. There, they encounter one of the visitors, Hekom (Mukhameto), seeking a component essential to getting his ship functioning again – a piece that ends up in the hands of the authorities. Yulia, whose father (Menshikov) is conveniently high-up in the Russian military, ends up rescuing Hekom, and helps him recover the item. But Artyom is less than impressed by the rival for her affections, and rouses a group of those disgruntled locals against the aliens.

Even if the apparent social commentary on things like police brutality is not likely to resonate with a foreign audience, these angles still provide a Russian twist on the recognizable elements. As a result, the end product remains fresh enough to keep my interest, and wisely doesn’t even try to compete in sheer spectacle with the gob-smacking initial crash. It helps that Yulia is considerably less irritating than most cinematic Western teenagers, despite only narrowly escaping the destruction because she bunked off a school assignment to aardvark with Artyom. She has a faith in humanity that’s touching, if a bit naive – as Artyom demonstrates. Perhaps it’s something learned from her father, who is very much the voice of restraint in authority.

There aren’t many surprises as the rest of the film unfolds, yet it succeeds in remaining more grounded than many of its American cousins, and is superior for it. Though I must say, I’m a bit unsure about the wisdom of Artyom and his mob trying to storm the spaceship – surely the biggest technological mismatch since the Anglo-Zanzibar war of 1896 (which lasted a whopping 40 minutes). Fortunately, the aliens show remarkable restraint in their response, rather than taking off and nuking the entire site from orbit. It is, after all, the only way to be sure…