Maybe it’s just me who finds the “Cinematic Universe” concept over-rated. I saw the first Avengers film at the cinema. However, it felt as if Iron Man 3, Thor: The Dark World and Captain America: The Winter Soldier were all contractually obligated viewing before you went in to Avengers: Age of Ultron. Nah, I’m good. So I still haven’t seen that or Infinity War. I just want my superhero films to provide a slab of standalone entertainment on their own merit, not bloat things up with a plethora of superfluous tie-ins and cross-overs. Maybe that’s why I enjoyed this more than most recent products off the Marvel or DC assembly lines. 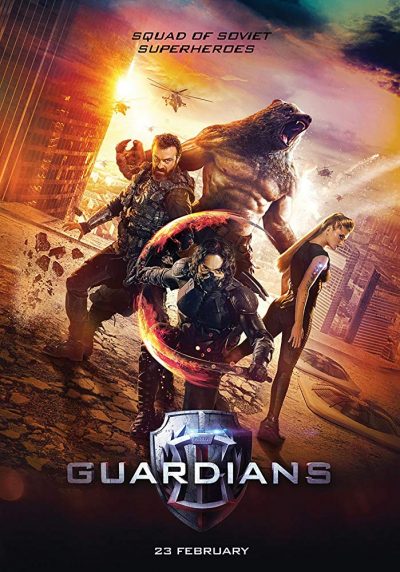 For despite playing as a Russian mash-up of The Avengers and X-Men, this is a lot of fun, and looks really slick, considering its budget was mere pennies by Hollywood standards [$5.4 million, which would get you about Scarlett Johannson’s left leg]. The set-up has a secret, and now abandoned, government project called ‘Patriot’, designed to create superheroes for the Cold War. A disgruntled scientist on a rival project, Professor Kuratov (Shirin), goes rogue and gains the ability to control machines with his mind, after the usual unfortunate accident. When he puts his plan to take over the world into action, the scattered remnants of Patriot, with their various superpowers, are located and sent to battle Kuratov.

In some ways, it’s generic comic-book stuff. Ler (Sisak) can manipulate earth and rocks; Khan (Madiyev) is super-fast; Ursus (Pampushnyy) shapeshifts into a bear; and Xenia (Alina Lanina) is invulnerable to heat or cold, and can go invisible. It’s the stuff around the fringes which kicks it up several notches: things like Khan’s F-sized curved swords,  which appear to have escaped from a particularly mad entry in the Final Fantasy video-game franchise. And, really, you haven’t lived until you’ve seen a giant, pissed-off bear wielding a telepathically controlled mini-gun. It’s also remarkably terse and to the point, running only 89 minutes, compared to 140+ minutes for each Avengers film.

Of course, you can pick holes in the plot: for instance, the existing Patriots are located with the cinematic equivalent of 30 seconds Googling, though let’s be honest: who cares? It’d only get in the way of the good stuff (I repeat: bear with a mini-gun…), also including  some impressively city-wide levels of destruction. I mean, Kuratov wants to use the Ostankino Tower as an antenna to control satellites – think the Eiffel Tower of the Moscow skyline. Except, he has first to knock it over, and then carry it through the city to its intended location. That’s the kind of “big picture” thinking you can only admire in an evil overlord.

Despite everything, the film bombed in its native Russia, and has largely been panned elsewhere. However, a sequel to the concept is being considered out of China, using their local superheroes, which is an intriguing idea. Having seen Wolf Warrior 2 and Operation Red Sea, and the mad skillz of mere Chinese hoomanz, I can barely imagine of what feats Chinese superheroes might be capable.