What the FUCK did I just watch? Even the loose standards of plotting employed in previous movies – and that’s being generous – are abandoned, for reasons that can only be summed up as “because time-travel.” The end of the last film hinted at Fin (Ziering) and son Gil (played there, deliciously by Dolph Lundgren) entering the fourth dimension, in a sequel that was part Sharknado 6, part Back to the Future mockbuster. The reality is considerably more disjointed. The bulk of this is a series of sketches in which Fin, April (Reid), the head of the robotic version of April, and various other people you probably thought had died four entries earlier, fight a sharknado in some time period alongside “celebrity” cameos of various effectiveness. Rinse, repeat.

This is all in pursuit through time of Gil, for reasons best described as vague. Though even this only becomes clear after the original stated goal, of destroying the “patient zero” of sharknados, has been achieved and then discarded without explanation. If that was the actual goal, then starting in the modern era, and working their way back, would have made more sense. Hang on, did I just use the phrase “more sense” in regard to the sixth entry in a franchise about shark-filled tornadoes? My mistake. The bigger problem is the thoroughly intermittent entertainment offered, to the point I think I may have dozed off momentarily during the Revolutionary War segment. They literally throw everything including an actual kitchen sink into this entry, inevitably to declining impact. 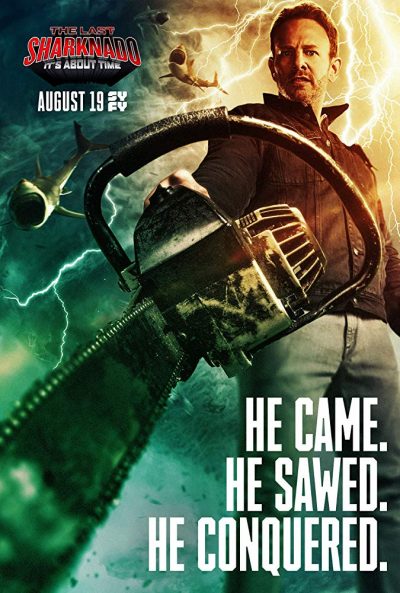 Even the celebrity cameos are disappointing. Neil DeGrasse Tyson frankly looks embarrassed to be there, though Dee Snider made for a surprisingly decent Old West sheriff, and gets to deadpan various appropriate lines, e.g. “I’m not going to take this anymore” and “I think I know who’s twisted, mister.” I was amused by Ziering being re-united with former 90210 partner, Tori Spelling, who plays his mom. However, the only segment to get out of the painfully obvious has them sent forward in time, to the year 20,013. Robotic April had apparently gone insane after her head was left on the ocean bottom for years and constructed an entire cargo-cult of Fin worshipping clones: “Planet of the Aprils,” as one character quips. It’s actually imaginative enough to work, and if you’re not creeped out by an entire army of robotic Tara Reids, I’ve got nothing.

Going out on their own terms and getting to draw a line under itself, is a privilege offered to few B-movie franchises. These instead tend to end up flogging the deceased equine, for as long as any money at all can be squeezed out [see the Hellraiser series, still going 31 years after the original, with the tenth movie released in February]. So, give the makers credit for pulling their own plug, and they do a half-decent job of tying up the loose ends in the final reel, giving Fin an at least slightly poignant farewell speech as they all head off into an apparently sharknado-free future. Complaining this is a mess is probably missing the point: so were the previous five, yet at least three (1, 2 and 5, if you’re counting) were considerably more fun. For this is an underwhelming mess: it’s a sad way to end, with my biggest takeaway the discovery that there exists a drag queen operating under the name Alaska Thunderfuck.