If Sharknado is the longest-running shark movie franchise, then the _-Headed Shark Attack series is getting up there. This is the fourth entry in the saga since Carmen Electra first faced off against a fish with a mere two heads, back in 2012. Though I am still bothered by the fact that they skipped the 4-Headed version, going straight from three to five. No such problem here, as they tack on just the one extra; after adding the fifth at the ass-end in the previous installment, they opt for a more symmetrical arrangement. There are two at the front, which do most of the biting, and four on the sides, a pair at the front and back which are used for… Well, we’ll get to that. 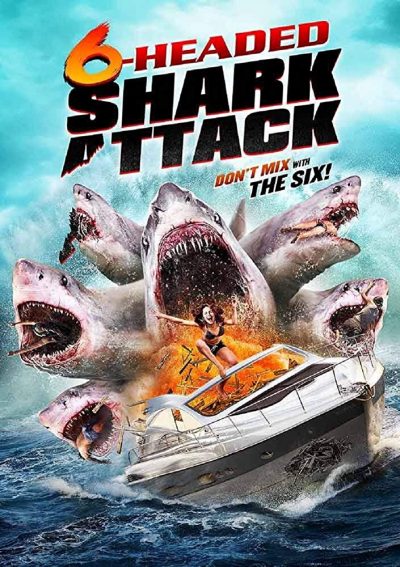 The plot has a couples’ therapy group, taking place on an island off the coast of Mexico. It is, shall we say, a bit crap, because the man in charge is going through a messy divorce with his wife, the actual therapist. Thus leaves him flailing around to stave off the whiny guests, who are none too happy about the offered course. Things go from bad to worse when a storm threatens and the titular creature shows up to start munching on the registrants, the product of a secret government lab (points for referencing Plum Island), trying to use sharks’ regenerative capabilities in humans. Yet there are things with which mankind is not meant to meddle. For they succeeded only in creating a monster who, when you lop off a head, grows it right back… [I’d have saved the hydra motif for 7-Headed Shark Attack, but that’s just me]

There are many aspects of this that fall well short of competent. The shark is remarkably variable in size. At one point, it’s small enough to be able to get multiple heads up through a trapdoor. At another, it’s a true behemoth. The supposedly threatening storm never actually shows up, and the claim the abandoned lab (which either hasn’t been used in 30 years or was abandoned last week, I’m not sure) is the only place to shelter, is given the lie by shots showing very high, presumably water-resistant cliffs in the background. The film also jumps from the dead of night to broad daylight in consecutive shots near the end. These are failures of basic cinema technique, and I’m not even bothering to discuss the annoying characters, who make for the least convincing “couples” I’ve seen.

Fortunately, things improve significantly when it becomes less “people vs. people” and sticks to “people vs. shark.” The creature does not mess around, and is amazingly irritable – more than once, it gnaws one of its own heads off, albeit temporarily as explained above. The deaths are frequent and gory, though mostly with CGI blood, and there’s one glorious moment which justifies the entire escapade. For it turns out, land offers no safe haven, because the creature will haul itself up, using its side heads to scamper across the ground like some demented scorpion, roaring as it goes. This insanity sums up perfectly why we watch these films, and left us super-stoked for the next edition. How high can the head-count go? Only time, and the SyFy Channel, will tell.