The wraps were being kept very tightly on this one. No IMDb page. No trailer. No poster. And I couldn’t even locate the name of the director – or directorS, as it turned out – before it screened. All we had to go on was the photo below, and a one-sentence synopsis: “A group of shark-attack survivors are hunted by a supernatural shark that haunts their dreams.” Still, it seemed more than enough, with the pic in particular clearly riffing on a famous scene, to dismiss this as a ludicrous fish-flavoured version of A Nightmare on Elm Street.

Not quite. While sharing some elements, such as the communal dreamscape, the ability to bring in objects from the outside, and the notion that if you die in your dreams, you die in the real world, there are others that are novel and surprisingly interesting. Not least of which being, this ties in to at least two previous SyFy movies: Atomic Shark, starring Smith, and Trailer Park Sharks, in which Jovovich appeared – the latter incident also pops up in press cuttings shown on screen. The idea that all SyFy shark movies take place in the same universe is an eye-opener. We should have a cross over between this one and Santa Jaws, and call it The Nightmare Shark Before Christmas.

In contrast to the other movies this week, the shark here is not “real”, or at least is of uncertain objective reality. It’s more a manifestation of the oceanic PTSD which brings a group of photogenic young people to the remote facility of Dr. Novak (Amendola – or G. Murray Abraham as we called him, since the similarity is striking enough for him to be a low-rent knockoff). They are there, supposedly part of a drug trial to help cure them of the nightmares which have plagued them since their traumatic experience. 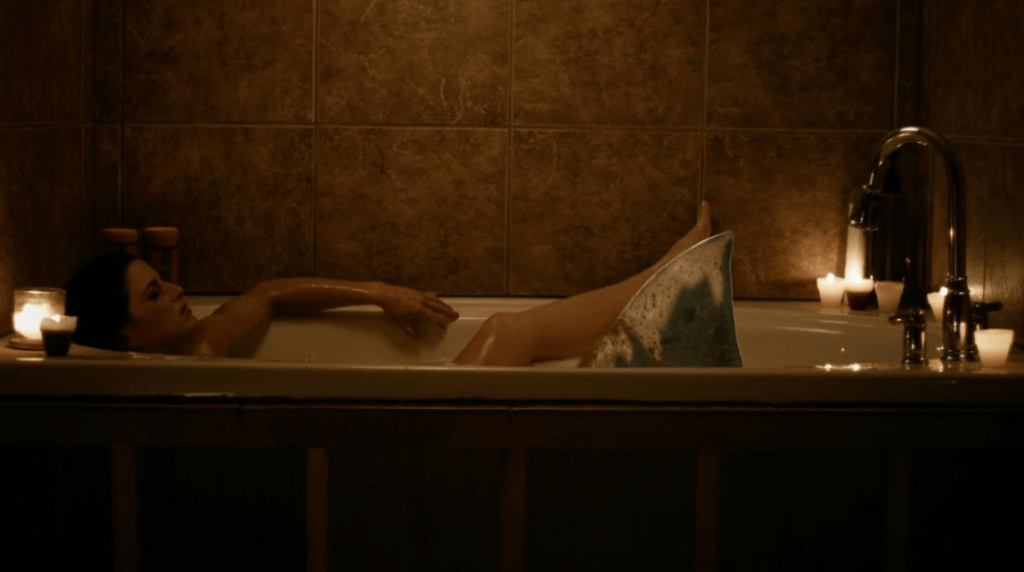 Except, naturally, it’s not that simple, and we soon discover Novak has an agenda of his own. We don’t find out what until almost the end, and if certainly a stretch in plausibility, it has a certain Lovecraftian charm. While skirting vaguely around spoilers, the subjects’ presence is no coincidence. Turns out he’s using their fear with the intention of prying open something which should very definitely remain shut. It’s this aspect which separates the film most notably, both from an Elm Street clone and what I was expecting, along with the entirely non-jokey tone. Nightmare shark is serious business, it would appear.

The film does a nice job of blurring the lines between reality and the dream world: at any given time, you are usually unsure on which side of consciousness you sit. However, the rules governing this are so vague as to be non-existent, and I did wonder where Novak had gone in the middle of the film. After dumping one into what appears to be the world’s slowest MRI machine, he all but vanished, leaving his patients to scurry around in increasing concern. Outside of G. Murray Abraham, the performances are a bit generic, to the point of forgettable. Yet this was a pleasant enough surprise, definitely exceeding expectations. Admittedly,  considering the half-baked disaster for which I was braced, that’s not very difficult.