Wait, what? This is more of the same? I guess I should look forward to the upcoming Asylum production, Psycho, in which a fleeing woman is eaten by a shark in a motel shower. The frenzy here is strictly of the feeding variety. Travel blogger Paige (Vitori) takes her kid sister Lindsey (Reynolds) with her on a scuba-diving trip to a remote beach in Thailand. The plane taking them there crashes, leaving Lindsey to fend off a trio of hungry white sharks, with nothing but her deeply concerned expression. Well, that and an inflatable dinghy, scuba equipment, a spear gun, gasoline, flares and a conveniently abandoned speedboat. It’s amazing what you find just lying around. 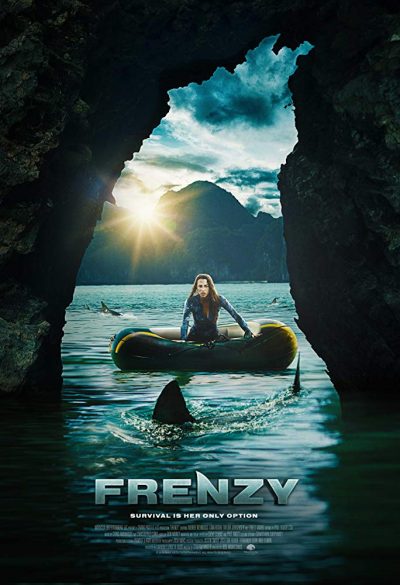 This one got off on the wrong foot, because I recognized Vitori from the really shitty Lara Croft knock-off made by The Asylum, Tomb Invader, which largely consists of people wandering around a forest. I was thus not pre-inclined to look kindly on this, expecting it to be a really shitty knock-off of the recent wave of shark-vival movies: The Shallows, 47 Meters Down, etc. Probably with people wandering around the ocean. My guess proved roughly accurate, which would not necessarily have been a fatal blow, except for the stupidity of the script.

This started when Lindsey instinctively knew how to activate the transponder on their sunken plane [a plot point which, incidentally, went absolutely nowhere thereafter]. Hell, I wouldn’t recognize a transponder without looking it up on Google Images, and would probably have turned on the plane’s wi-fi. But I can pinpoint the exact moment this jumped the shark, as it were. It was when Paige and Lindsey kill one of the fish by yanking a boulder out of a cliff-face onto its head. Imagine playing Dungeons and Dragons, say, and coming up with such a harebrained scheme: what kind of super-critical roll would the DM require from your character, in order to pull it off?

After that, the subsequent scene where a couple of pints of gasoline poured onto the ocean are sufficient to create a raging inferno and barbecue another of the fish, provoked little more than a tired sigh. Though I did hoot loudly at what must be the Worst Rescue Attempt in Cinematic History: a pair of speedboat bros show up and wave from a distance, before both being knocked into the water by the sharks bumping their craft. As a zoological aside, the three predators here act as rather more than lone hunters; maybe they were killer whales in disguise? [Aside to this aside: it’s high time to bring back the killer whale movie. Surely it has now been long enough for everyone to have forgotten the abomination which was Orca]

To the film’s credit, it doesn’t waste much time before the plane crash. To the film’s debit, it then keeps interrupting the sharkfest with repeated flashbacks to the teen angst of Lindsey making puppy-eyes at team-mate Seb (Jorgensen), while big sis glares at them. There is a Big Reason for this, which only gets revealed under circumstances clearly intended to be dramatic. It isn’t. Instead, remember when in the Santa Jaws review, I wrote, “It’s pretty rare not to be cheering actively for the shark”? Two words sum up this film very nicely.