If nothing new, there’s still the germ of a good idea here, undermined by particularly woeful execution. The slight twist on the “cabin in the woods” setting is that, rather than college kids or teenagers, the occupants are two married couples and a dorky brother, the last of whom enjoys going metal-detecting. He’s mocked for this pastime by the other four, only for the tables to be turned, when he comes across a stash of buried gold bars with an estimated value north of five million dollars. Unfortunately, this find happens to coincide with the release from prison of Mason (Keeney), the criminal whose ill-gotten gains these were. 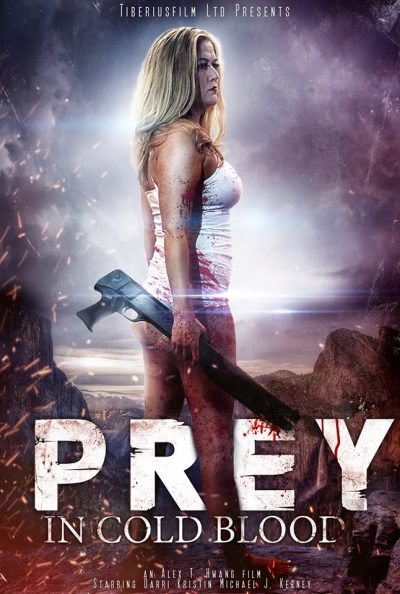 You can probably write the rest of the story yourself. The lucky five start to bicker among themselves about the treasure, only for things to be rudely interrupted by the arrival of Mason and his cronies, who are less than impressed to discover their loot has gone. From this point on, it’s not actually too bad, with a fairly decent pace and some enthusiastic violence. Admittedly, the foreshadowing of the finale is unsubtle: about the most blatant demonstration of Chekhov’s gun [“If in the first act you have hung a pistol on the wall, then in the following one it should be fired. Otherwise don’t put it there.”] I’ve ever seen. Or, in this case, Chekhov’s pump-action shotgun…

No, the problem is the pacing, because the treasure isn’t found until after the half-way point, and up to that point, you have to endure some highly painful “acting”, “dialogue” and “characters” – all quotes used advisedly. Of particular annoyance is Nick (Coyan), one of the husbands. While it’s clear he and his wife Erin (Kristin) are having marital difficulties, he’s still an unrepentant asshole. This point is made inside five minutes. This means you have another 45 of him to endure before the gold bars arrive, and signal the start of an actual plot. Only the fact I didn’t have anywhere else to be, stopped me during this phase from ejecting the movie. Which would have been impressive, since I was streaming it on Amazon.

The other problem is its low budget, or more specifically, an unawareness of its low budget. For instance, if you are technically incapable of recording conversation inside a moving vehicle, do not have conversation inside a moving vehicle. Especially when said conversation could just as easily take place in a restaurant, at a kitchen table, or in the basket of a hot-air balloon. Knowing your limitations and working within them is an important part of the genre, and too often, the ambition here over-reaches its abilities.

You’ll probably understand why the poster caught my eye. You’ll also understand my disappointment, when the film failed to deliver on anything much approaching the poster, or the Amazon blurb which reads – capitalization as in the original – “A Slick, Solid Indie Thriller That Will Leave You Breathless.” Nope, nope and hell, nope.