Roughly a cross between Gravity and Apollo 13, this tells the story of the Soviet mission in the mid-eighties to repair the Salyut 7 space station, after it suddenly goes dark and non-responsive. While unoccupied, there’s a risk it may end up crashing to Earth and hit an inhabited area. The Russians send up a two-man crew to fix it, and time is of the essence because it’s reported that the Americans may be attempting to preempt them, and take the station aboard the space shuttle instead.  On arrival, pilot Vladimir Fyodorov (Vdovichenkov) and engineer Viktor Alyokhin (Derevyanko) find the situation worse than anticipated. The entire station is frozen solid, and the solar panels won’t orient to the sun, leaving most functions inoperative. During the slow thawing-out process, an electrical fire leads to a dire situation with regard to oxygen: there’s now only enough to return one man to Earth. 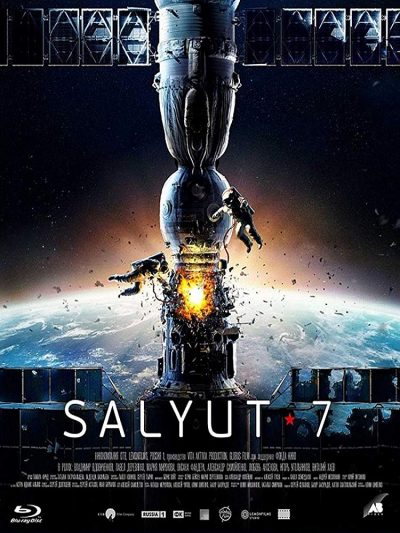 A major advantage over the American “space emergency” film, Apollo 13, is unfamiliarity. I’d no idea of the real-life outcome, which makes for a far greater sense of tension, than when you’re telling a well-known story. After the viewing, I read up on the history: while clearly enhanced for dramatic effect in a number of ways (not least: the original problem was due to human error at ground control), many basic elements are accurate, even if the last names of the people depicted have been changed. For example, the pilot had, indeed, been grounded for medical reasons, and was brought back to active duty due to his experience of manual docking.

Technically, it’s yet another case of an amazing looking Eastern European film on a tiny budget, with zero-g footage here which could easily be out-takes from Gravity. $7 million goes a lot further in Russia. [Literally, it appears, since the makers reportedly did film 20 minutes in actual space.] The cinematography gives you a particularly striking sense of the insane speeds involved, something it’s easy to forget with the balletic floating, or when the craft is approaching the station at relative walking speed. But then there’s a shot from a static position which shows the station bombing around Earth at an orbital velocity of 18,000 mph, with the craft pursuing it at 18,000 mph + walking speed. It certainly makes the docking manoeuvre all the more impressive.

On the dramatic level, perhaps the most impressive difference in approach is its understated emoting. For example, there’s a moment where the doomed Vladimir speaks to his wife Liliya (Aksyonova) and daughter. In Hollywood, this scene would almost inevitably be stewed to death – likely with Aerosmith swelling dramatically on the soundtrack. Here?

Liliya: Can you hear me? I love you.
Vladimir: I love you too, very much.
Liliya: Come back for me.

That’s as overwrought as it gets. I found this quiet restraint works enormously to its benefit, and runs throughout in a very prosaic and down-to-earth attitude to bravery. Vladimir and Viktor are not even there to save the world, they’re just doing their job – yet are still asked to make the ultimate sacrifice, for political reasons. That they accept this without blinking is the kind of heroism I find especially impactful.

The aspect with the Americans trying to capture the space station is a bit silly, even though this incident took place in the depths of the Cold War (1985). The film could have skipped that, and simply made the harsh, unforgiving environment of space the cosmonauts’ adversary. For this is at its best when providing a look at the perils which perpetually lurk there, and is extremely solid on both the technical and emotional levels. You’ll probably leave with a new-found respect for all those who dare challenge the edge of the atmosphere, regardless of their nationality.