After their friend is killed in an off-license robbery, four friends honour his final wish by going on a hiking holiday in rural Sweden. After Dom (Troughton) twists his ankle, they opt to take what appears to be a shortcut through a forest. To absolutely no viewers’ surprise, this decision is a fatal mistake. It’s not long before they are lost, stumbling across giant red flags in the shape of a gutted deer hanging in the trees (above) and an abandoned cabin containing an apparent pagan altar, while enduring nightmares, strange noises nearby and an overwhelming sense of dread. Things escalate after one of their party is apparently dragged from his tent in the middle of the night.

It goes kinda downhill for them from there. 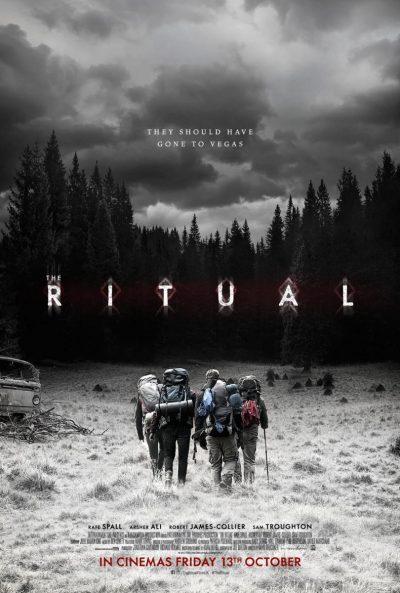 The first hour of this could be seen as a dark cousin to Trollhunter, and is a masterclass in cheap, off-screen scares. Things lurk, barely visible, in shadows, are reacted to by the party with horrified expressions, and the sound design here is off the scale for pure creepiness. We were completely nopeing the fuck out of camping, hiking or anything involving the Scandinavian countryside (even though it turns out the part of Sweden was actually played here by Romania). While the naivete of the participants has to be overlooked – have none of them ever seen The Wicker Man? – this is what The Blair Witch Project could have been, if it actually lived up to the hype, rather than vanishing into its own hand-held camera.

The problems are the final third, where an explanation is provided. Admittedly, you’ve painted yourself into a corner at that point as a film-maker. You can either cop out and offer nothing of substance, which can leave the audience feeling cheated – hello again, Blair Witch. Or you can try and deliver. It’s the latter route Bruckner takes and, to be honest, I wish they hadn’t bothered, even though the monster in question is reasonably cool. For this is one of the cases where the unseen – those things lurking, barely visible, in shadows – is more effective than the reality.

I must stress, that’s by no means a hard and fast rule: I’m not one of those snobs who reckons implicit horror is innately superior to the explicit kind. There are times where what you see can surpass your imagination, e.g. Hellraiser or The Thing. This just isn’t one of those, and “reasonably cool” doesn’t cut it. I can’t help thinking, if the earlier section had been less effective, the finale wouldn’t have seemed as disappointing. It probably doesn’t help that the interplay between the four guys, which has a thoroughly solid air of authenticity to it, has been entirely abandoned, and replaced by running and yelling.

Still, that first hour will live in our memories for some time. I’m just glad my thirty-something lads’ trips were to areas where alcohol poisoning was a significantly bigger threat than being disemboweled by a berserk Nordic legend.