I’d lost track of John Woo, until this suddenly popped up as a Netflix Original film. Seems like his only other directorial output since 2010 was The Crossing, a two-part story which underperformed worldwide, and appears to have been a Chinese version of Titanic. Thanks, but I’ll pass.

This is closer to what we’d expect as “traditional Woo”. Chinese lawyer Du Qiu (Zhang) is framed for murder in Osaka, but escapes custody and goes on the run. In pursuit is detective Satoshi Yamura (Fukuyama), who increasingly grows to believe the Du is innocent, and being set up by his former employer, Tenjin Pharmaceuticals. Turns out there was a murky and ongoing project to create a super-stimulant for military purposes, involving illegal testing on humans. On one side of the ensuing conflict, you have Du, Yamura and Mayumi (Qi), the fiancée of a Tenjin researcher who committed suicide on their wedding day. On the other, various corrupt people and a pair of assassins in the pay of the company. 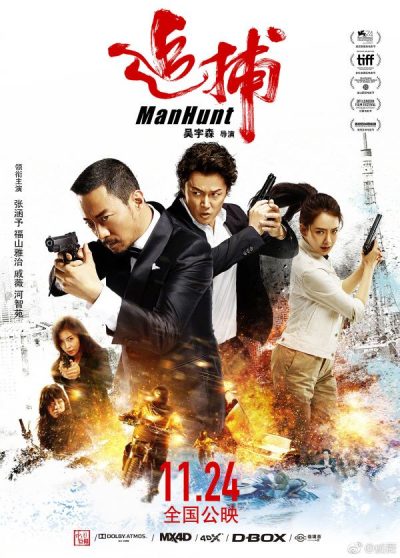 It’s very much the Asian equivalent of a Euro-pudding, with seven different scriptwriters apparently sharing the same beer-mat, throwing together Chinese and Japanese actors, and making them act, not just in each other’s languages, but English as well. The results are distracting, in that you spend half the time trying to figure out who’s getting dubbed, and few of the participants are equally good in all tongues, leading to jarring shifts in performance tone and quality. There’s also some shockingly poor green-screen and CGI work. especially given the budget here was $50 million. Check out the jet-ski chase sequence, for example. [Side-note: in Osaka, multiple unlocked jet-skis are apparently just left… lying around]

While certainly stopping this from being very good, it doesn’t stop it from being entertaining, especially when the characters stop phonetically reciting dialogue in foreign languages, and get back to John Woo’s mother tongue, stylized hyper-violence, with punctuation supplied in the form of gunshots and slow-motion flying doves. He’s perfectly proficient there, the film probably reaching its apex during an assault on the rural farmhouse where our trio are hiding out, with Du and Yamura handcuffed together and no key available. The resulting battle has doors being knocked on with motorcycles, and is the kind of loony insanity which quite takes me back to Woo’s golden era. [An era directly referenced at the end when one character says, “For a better tomorrow…”]

However, even these moments can’t overcome the problems with the leads, who leave me yearning for the charismatic likes of Chow Yun-Fat. The more excessive and overblown a film goes, the greater the need for a grounding presence at its center, who can give the audience something to hold onto. That’s perhaps why I always preferred Woo’s work in the eighties and nineties to the films of Tsui Hark, which lacked that solid core. It’s also missing here, and the results, similarly, are lacking any permanent impact.