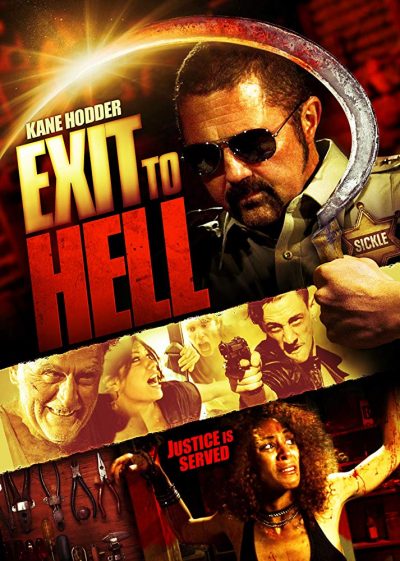 Though I’ve seen reviews comparing this to The Devil’s Rejects, it initially feels a little more like 2000 Maniacs. The remote Arizona town of Red Stone does not take well to strangers, particularly those of a less than law-abiding kind. Local sheriff Slade Sickle (Hodder) has a zero tolerance policy for… Well, just about anything. Which is unfortunate for the four ne’er do wells, who have got lost as they high-tail it out of Phoenix after robbing a strip club used by the Russian mafia to launder money. They’re led by Travis (Leighton) and Jenna (Shepis); in pursuit of them is Yakov (Spisak), intent on recovering his cash and meting out brutal justice to the perpetrators. Though he might have to get in line behind Sickle for the latter…

To be honest, the first half here works a good deal better than the second. Initially, the film has initial lurid, pedal to the metal energy, helped by Conway’s hyper-kinetic, pulpy style. Red Stone is populated by any number of creepy inhabitants, with particular praise to Dan Higgins as local gas station proprietor Mordin. I was looking forward to a “city vs. country” war, perhaps like a rural version of The Purge. [If anything, that concept would have gained cultural relevance due to events since this was filmed, several years before its eventual 2013 release date] Unfortunately, it instead becomes far less interesting: a generic, not very good Texas Chainsaw Massacre clone, with the Sickle family – right down to a crippled “Ma” – chasing Jenna and pals around in terror. Gory enough, to be sure, yet over-familiar and consequently rather dull.

Hodder, best known as Jason from a number of the Friday the 13th films, has the necessary physical presence as Sickel, and Shepis is her usual reliable self. The rest of the cast are less memorable, with the possible exception of Rena Riffel, who played a stripper in Showgirls, playing… a stripper. One amusement is the way everyone is watching the same zombie film on the television: that’s one of Conway’s earlier works, Necro Wars. Points for working that in, though take most of them back off for grinding the joke into the dirt through excessive repetition. Mind you, even with all the extra footage, the feature comes in at only 81 minutes, so there may have been some necessity involved in the padding.

Overall, as a low-budget pseudo-Tarantino knock-off, I’ve seen worse, and Conway makes good use of what I suspect were limited resources. Though if you’re going to do a homage to the era of grindhouse , you probably need to be more consistent with regard to your tone and content. For example, not switching on and off the video “scratch” filter at apparently random intervals would have helped the overall atmosphere. Finally, the Arizona connection is always a factor of interest, and nice to see something set here which was actually shot here. Yes, I’m looking at you, Queen of the South, and your remarkably arboreal version of “Phoenix”…