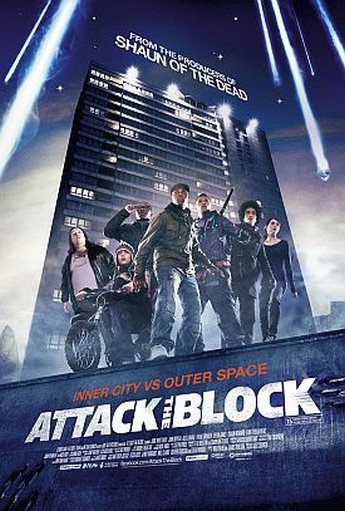 On her way home from work, Sam (Whittaker) is mugged by a gang of teens led by tough-guy Moses (Boyega). The assault is interrupted by the arrival of a fireball which crashes into a parked car. From it, an extra-terrestrial emerges, and is rapidly polished off by Moses and his mates. However, it is just the first, and smallest, alien – many more fireballs soon follow, and are nowhere near so easily dispatched. After seeing exactly what the new arrivals are capable of with their luminescent teeth, when they take apart both the police and the local crime-lord’s sidekick, the gang retreat to the tower-block they call home, and prepare to defend it against all comers – be they human or not. After one of their number is badly clawed, the gang discover that they could use Sam’s help, since she’s a nurse. They also find themselves struggling against cellphones with limited talk-time, authorities who are unconvinced of the threat [or who may even be behind it, as one character suggests – shades of the CIA pushing drugs in LA], and siblings who disapprove of just about every act.

Probably the 2011 winner of “Film I least expected to see show up in one of Arizona’s biggest cinemas” [the Cine Capri at Tempe Marketplace, to be exact], I was a little concerned about how this might play in the light of the urban unrest experienced in Britain earlier this month. That turns out less a problem than trying to work out what half the characters are saying, as the urban slang used in abundance is often incomprehensible. Fortunately, it isn’t a film that needs a lot of exposition, and the performances provide a greater depth of character than I expected, as the tiny thugs turn out to be more moral than initially appears. It’s thoroughly entertaining, with hardly a slack spot to speak of, and more than somewhat reminiscent of John Carpenter in his heyday. Whoever came up with the creature concept deserves particular praise, as it succeeds admirably in being creepily alien, without being more than a black silhouette, save for the glowing mouth. This could easily have been a self-indulgent disaster; it’s far from that, and is one of the best low-budget genre entries I’ve seen in some time.