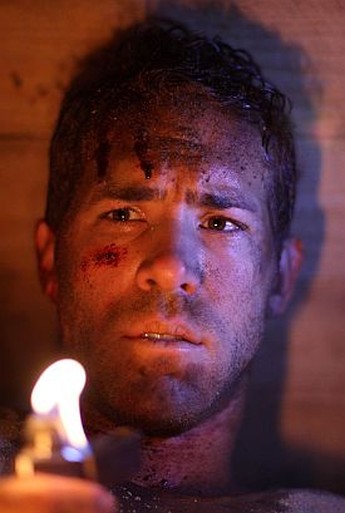 Paul Conroy (Reynolds) is a truck-driver working in Iraq. Apparently abducted, he wakes to find himself underground in a box, with a cell-phone, light and not much more. He tries to call for help, but 911 aren’t much help, and nor are his company, or just about anyone else. Time is running out, with his captor demanding $5 million in a couple hours, and that Conroy record and send a ransom video on the phone, to make his case public. The only hope for salvation seems to be the voice of hostage negotiator Dan Brenner (Paterson), who is trying to track down Paul’s location.

The plot summary above is brief, but covers the entire film with a fair degree of accuracy. This seems like an impossible concept to keep going for 90 minutes: the movie never shows anyone except Reynolds, and never leaves the confines of the box either. It succeeds, but one fatal mis-step in the early stages probably dooms the script. Conroy is speaking to one person in the US, who knows his name without having been told it: Conroy pulls them up on it, and it is explained, but that sets unrealistic expectations the rest of the way. You keep expecting some kind of dramatic reveal [if you’ve seen Five Fingers you’ll know the sort of thing], and at the risk of giving too much away, the film opts to play it entirely straightforward.

That basically equates to “safe”, and as a result, there’s a sense of let-down when the final credits begin to roll. This is a shame, as the movie works within its self-imposed limitations quite nicely. You travel along with Conroy, as he tries to figure out an escape route, and most of his actions seem logical, given the circumstances. Unfortunately, there are a couple of cheap tricks: a snake somehow manages to find its way into his trousers (!), and his diminishing resources appear to do so exactly as necessary for the plot. However, if you have any degree of claustrophobia – and I think most people do – this is capable of pushing a few buttons.