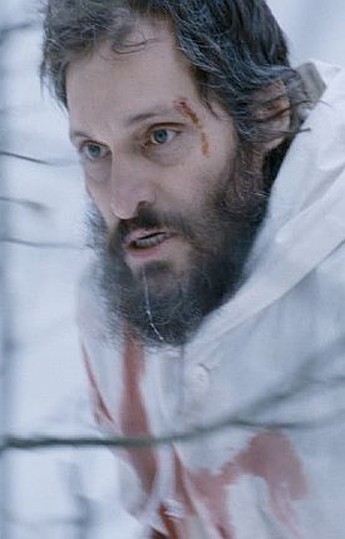 It’s certainly an unusual premise. Middle East insurgent Mohammed (Gallo) is captured after launching an attack on occupation forces, and taken to Poland for “rendition.” Courtesy of a road-accident, he is able to escape, only to find himself stuck somewhere in the middle of a barren forest, a complete contrast to the desert from which he came, though the conditions are equally harsh. He has to try and survive, as his much better-equipped pursuers hunt him through the frozen landscape. At about 80 minutes, it’s short, but really, there’s not much more than that going on: Mohammed doesn’t say a single word to anyone over the course of the entire film. It’s an interesting concept, which could have been a set-up for a high-octane chase movie – perhaps twisted, so that the audience is invited to sympathize with someone who is not your typical Hollywood protagonist. However, Skolmowski doesn’t seem particularly interested in those angles – it’s much longer on atmosphere than adrenaline – and keener on confounding obvious audience expectations. For instance, an easy cop-out would have been to show Mohammed’s family killed by US forces. There’s nothing like that to give his initial actions a conventional motivation.

That said, a bearded, mute bloke stumbling around trees for more than an hour is hardly enthralling viewing. Seen one snowdrift, seen ’em all. The moral relativism on view also feels more than slightly a cop-out: telling the audience to “make up their own minds” as to motivations is like throwing a party and telling guests they must bring their own booze. Credit to those involved, for what can only have been a gruelling shoot in the Polish woods, particularly Gallo, who is trudging barefoot in the snow for a good part of the time. Mohammed’s willingness to do anything to survive is certainly not underplayed: two scenes in particular, involving a logger and a woman on a bicycle respectively, will stick in your memory [albeit for some of the wrong reasons in the latter’s case]. While this is an interesting exercise, it’s so defiantly uncommercial and playing against expectations, it ends up more of a curiousity than genuinely effective.