After the disappointment which was Dragged Across Concrete, I was a little leery of devoting another 2+ hours to Zahler. While this does unfold similarly, at its own damn pace, the content justified the running-time much better. Add in a remarkable performance from Vaughn, looking like a cross between Woody Harrelson and Matthew McConaughey, and you’ve got a movie which needs to be enjoyed with a Cuban cigar and a large glass of 16-year-old malt whisky. For this is, like Bone Tomahawk, a full on man’s movie. Wusses need not apply; you need a high tolerance for the breaking of bones, stomping of heads, and the slow, relentless pursuit of justice and what’s right. 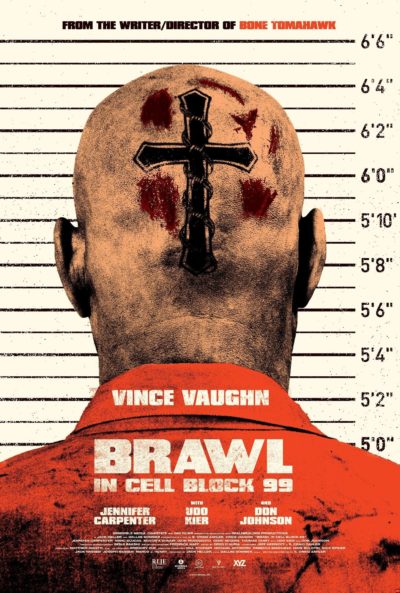 Bradley Thomas (Vaughn) is laid off from his job as a mechanic, and becomes a drug courier for Gil (Blucas), while his wife, Lauren (Carpenter), gets ready to have their child. However, a pick-up of $3 million worth of meth goes wrong, with Bradley getting seven years in prison. There, he gets an ultimatum through an emissary (unexpected Udo Kier!) from Eleazar, the Mexican cartel boss whose drugs were lost. Get transferred to a maximum security jail and kill a man there called Christopher Bridge. To ensure Bradley’s compliance, Lauren is kidnapped, and threatened with a late-term abortion. BIG mistake. For Bradley has a strong sense of right and wrong – and Eleazar’s actions fall definitively into the latter category. The cartel king may have the upper hand… for now.

What might be most interesting, is that Bradley isn’t exactly a sympathetic character initially. He’s a recovering alcoholic, with a temper which tends to be unstoppable when triggered: witness his measured demolition job on Lauren’s car. That he then opts to become a drug runner hardly enhances his character. Yet we eventually discover there is a strong moral code by which Bradley operates, even if it gets him sent to prison. Once he’s given Eleazar’s demand, with its cruel “or else…” condition, we’re fully behind Bradley, and invested in finding out how (or if) he is going to fulfill his task. It will take a descent into hell, for if the maximum security facility is bad enough, the “prison within a prison” which is Block 99, is almost indescribable.

It’s a case where badness becomes relative. Bradley may have his flaws, yet he’s not “dismembering an unborn foetus in its mother’s womb” evil. In the absence of alternatives, you have to root for him, despite the trail of escalating carnage behind him. The victims may not all deserve it; the poor first prison guard just happens to be in the wrong place at the wrong time. However, by the time we reach the inevitable confrontation, you will, equally inevitably, have been seduced into cheering for what have to be among the most savage acts of violence in a mainstream American movie since… Well, probably Bone Tomahawk. Yet without the distancing aspect of history, this may be more disturbing still.