This is definitely one of those Chinese movies intended to grab the viewer inside six minutes. It begins with a thoroughly insane beach attack sequence, where a multi-tentacled monstrosity storms across the sand, apparently the result of mutation caused by mankind’s long-term and ongoing pollution of the oceans. There is a quite stylish one-shot, a lot of running and screaming, plus a thoroughly disrupted wedding, which ends with the groom being pulled away from the bride’s desperate grasp. It’s enough to counterbalance some less than impressive CGI. The problem is, you might as well turn it off after those six minutes. Nothing else this has to offer in the remaining hour, comes remotely close to matching the opening. 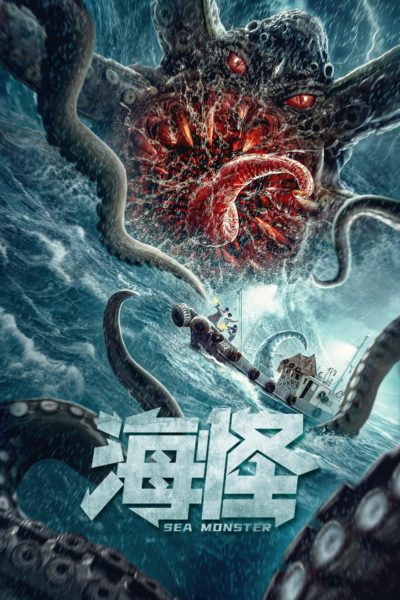 We then fast forward to some indeterminate later point, where a ship is sailing through the ocean, on its way somewhere for an undefined purpose. The gruff, bearded captain is on his last voyage before retirement – so you know he is, literally, dead in the water – and there’s dissension in the ranks over who should take over for him. Such petty issues are quickly put to one side, after a member of the crew is violated orally by a random tentacle, and turns into a low-budget, kung-fu kicking version of the Creature from the Black Lagoon. Fortunately, there is A Scientist on board. She merits that capitalization, because on drawing a syringe of blood (green and icky) from the victim, she can immediately deduce it’s a result of a parasitic infection. When your movie is only 66 minutes, you do not hang around for laboratory test results to come back.

In her defense, she does have experience in the area of unexpected sea monsters. For it turns out, she was the de-groomed bride from the opening sequence on the beach. As a result, she has devoted her life subsequently to researching the problem and developing an antidote to the parasites. Convenient, that. Oh, and then the pirates show up. Quite what their purpose is, is equally uncertain. Still, they look the part, firing their automatic weapons in air a lot, and that’s what matters, after all. They take the crew to a remote island where… stuff happens. This is not me avoiding spoilers. This is me having lost interest and stopped paying attention.

A couple of moments did stick in my mind. Just not in a good way. In particular, the shot where a Jeep runs into Mr. Black Lagoon. Really, you could produce a more convincing effect with a flip-book. It all escalates (or more accurately, “escalates”) to a fight on the docks which feels like it was copy-pasted into Crazy Spider. The film closes with a moral about how it was all our fault, and we must do better. “The moment we destroy Mother Nature,” we are told, “our happiness dissipates with it.” So all this and a shitty lecture too! Excuse me, I’m off to the kitchen to make myself a dolphin sandwich.