And, so: farewell to Daniel Craig, the man who – to my surprise – has spent more years in the tuxedo than anyone else. This is, admittedly, largely because they’ve not been pumping them out nearly as fast. It had been six years since the last Bond movie, enough time to encompass all of Sean Connery’s tenure bar Diamonds are Forever. Like most previous incumbents, Craig has been responsible for a mix of good and bad. Going into this, I’d say he had delivered one and a half excellent Bonds (Skyfall and the first half of Casino Royale), but the rest were meh at best. Would Dan go out with a bang? 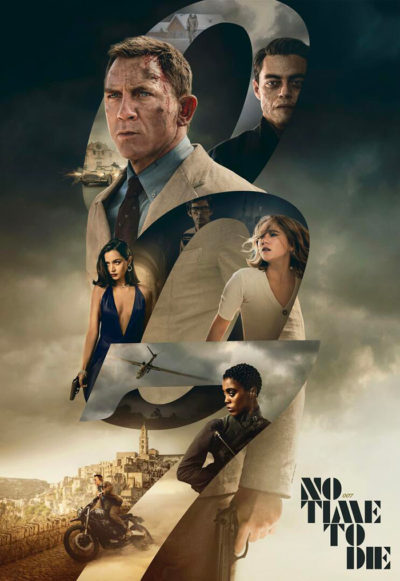 Uh, maybe scratch that. I knew going in that… certain things were going to happen, so was emotionally prepared. Turns out, I needn’t have bothered. The closest I came to any genuine impact was hearing the original version of We Have All the Time in the World playing over the end credits. And that was only because it reminded me of On Her Majesty’s Secret Service, which I firmly believe to be the best Bond film, save for having the worst Bond. Similarly, there had been previous callbacks to OHMSS: always a risky move for any franchise film to remind you of a previous, well-regarded installment. What you get here is competent, and occasionally impressive, yet I’d be hard-pushed to say it justified being the longest in 007 history, at 163 minutes.

It is, in some ways, a throwback, since what you have is an insane villain, Lyutsifer Safin (Malek), with a Doomsday-like plan, operating from a ludicrously implausible island lair. But in other ways, it’s trying to be all modern. Most obviously, in the replacement of Bond (Craig) as 007 by Nomi (Lynch). This actually works well: Bond had quit, and this isn’t baseball, with his number honourably retired and hung from the rafters in Vauxhall Cross. Far more cringey was Q coming out as gay, which seemed horribly forced, for a character whose sexuality is, in fact, utterly irrelevant. Just hand over the exploding fountain pen and move on.

The bulk of this feels too much like an exercise in checking the requisite boxes, of exotic locations, more or less spectacular set pieces, and tidying up of loose ends such as Blofeld. This will do wonders for the tourist industry in Matera, for example, and Norway looks nice – even if Scotland subbed in for the fog-shrouded forests. This provided the most memorable action beat, with a motorcyclist getting the clothesline from hell by a Landrover hawser. I also enjoyed Ana de Armas as a CIA agent who assists Bond in Cuba, kicks ass and looks good doing it. [Give the gal her own franchise!] Yet it felt padded, with the backstory of main Bond girl Dr. Madeleine Swann (Seydoux) adding little to the film except for running time. It is clearly going for the big emotional bomb at the end, but it felt like a swing and a miss. For at the very end of the credits, we are informed, albeit a bit shamefacedly, that JAMES BOND WILL RETURN. Really? This is my unsurprised face.