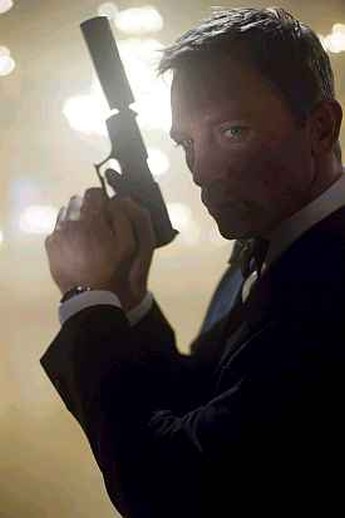 About one-third of the way through, this had “best Bond ever” potential, with tremendous action sequences which had me salivating for more. So what happened? Well, the middle turns into the World Series of Poker, and the conclusion comes nowhere close to equalling what had gone before, resulting in a sense of let-down. Not that this is by any means “bad”: Craig surpassed my expectations, and this is the 21st-century Bond the past three films all failed to deliver. This one takes damage and needs few gadgets (Q doesn’t appear at all) save an in-car defibrillator, though does seem an advanced age to receive Double-0 status. His first mission ends in public exposure, and as a result, he must try to salvage things by revealing and bankrupting terrorist banker Le Chiffre (Mikkelsen). This takes place at a high-stakes poker game in Montenegro, where Bond’s stake is overseen by HM Treasury agent Vesper Lynd (Green).

And that’s where the film grinds to a halt; I never could understand the appeal of poker as a spectator sport (it replaces the now archaic game of baccarat from the novel), and there’s way too much checking, raising and calling. The action highlight may, in fact, be just after the opening credits, a frenetic foot-chase featuring parkour master Sebastien Foucan that is thrilling, largely because of the lack of CGI. A tanker chase at Miami Airport is also well-constructed, but the finale, a brawl in a collapsing Venice apartment building, doesn’t have the sense of excess or awe which a Bond film really still requires, even in this new, down-to-earth incarnation. Still, as a reboot, this definitely kicks much-needed life into a franchise which was, frankly, struggling. Consider it shaken, though I was not enormously stirred.