– No mister Bond, I expect you to act!

To say up front, I thought Daniel Craig’s first outing as Bond in Casino Royale (2006) was excellent, and this is similarly a very good film. It plays with and pays homage to the Bond franchise, particularly resonating with the solo outing by George Lazenby and Diana Rigg in On Her Majesty’s Secret Service (OHMSS).  Perhaps unexpectedly this 1969 film is actually core to the overall narrative here, and it is alluded to on numerous occasions and in many ways.  I actually found it quite touching, although prior viewing of OHMSS isn’t required (it just helps).

The story itself is, well, pretty standard fare really.  Bad people with evil plans are doing bad things with lots of potential for world-altering outcomes, and they don’t even appear to like petting small furry animals.  So, yeah, thems is real b-a-h-d people!  Albeit in this case it is minutely more nuanced than it may at first appear.

Shocked?  Well hold on to your popcorn darling, the upsets have only just begun!!  Quick, quick, call for 007… Now look, I’m not going to spoil the plot, there are some great set pieces and a couple of turn-ups that may surprise/upset/delight.  As for the big shocking twist at the end?  Well, it’s only a big shocking twist if you’ve not been paying attention, and it plays back very nicely and neatly into Lazenby and Rigg’s OHMSS. 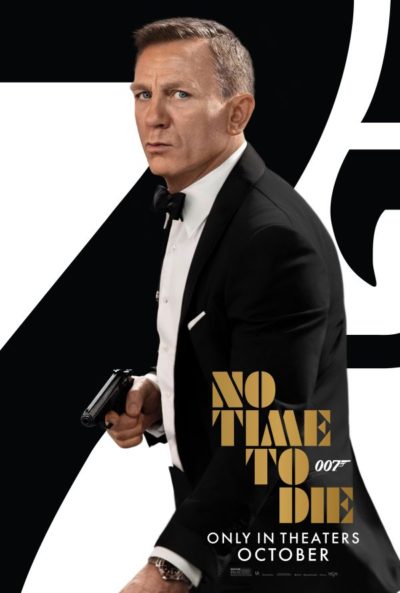 However there are some decent smaller twists along the way, and quite a lot of humour, most of which is intended and genuinely laugh-out-loud amusing.  There is however one scene where in the middle of the back-end-of-beyond-of-nowhere, from everywhere suddenly pours countless men on bouncing and leaping all-black motor-bikes, wielding machine guns with any number of huge blacked-out 4×4’s bursting (unscratched) from every hedgerow.  I couldn’t stop laughing, and to be honest now can’t recall if they also had a blacked-out helicopter as well… they probably did… well, why would you not!?  It is that sort of a film, bruv.

The film’s structure is typical Bond, and it was with an oddly delighted ‘warm bath’ feeling that we finally arrive at the huge sound-stage for The Finale.  It was like greeting a good friend after an unusually long break.  Shaken or stirred?  Do I look like I give a damn?

Now.  It’s now time for The Big Shock.  Ready?  Okay, take a deep breath, and here we go…  …there is actually some real acting taking place here.  You know, ‘real’ genuinely messy human emotions and all that icky stuff, even tears, and (hats held on-to please, and do not raise your arms during the ride) even Daniel gets in on the act (see what I did there?).

In fairness, all the players play their parts well, although Rami Malek has perhaps the toughest ride with the limited acting elbow-room available in his role.  Lea Seydoux is good, while Lashana Lynch is stand-out great, and plays her role with a delightfully refreshing joy and gusto.  The others we expect, Naomie Harris (Moneypenny), Ben Wishaw (Q), Jeffrey Wright (Leiter) and Ralph Fiennes (M) all deliver very well too.  It is a solid cast, on form, doing a good job.

And everything else is up to snuff too: the film looks suitably lovely, the action scenes are mind-bogglingly kinetic, the music does a nice job, although the title-song doesn’t hold a candle to Adele’s Skyfall, but then, what can?  Overall, it’s a Bond film.

I’ve chosen to keep quiet on the plot (and some huge gaping holes within) and so avoid any spoilers along the way.  And if you fancy seeing the film I strongly suggest you remain unspoiled too.  It’s well worth it. The final verdict is that the time absolutely flew by, and the opening sequence is so enormous that when the credits finally started I’d actually forgotten that this was just the ‘set-up’.  Phew!!

So why the three scores? Well if you’re a fan of Craig as Bond it’s a straight A, whereas if you just like these sorts of films it’s a B+, and if these films aren’t your thing then (why have you read this far and) it’s a D-.

So finally, finally, I’ll give you two spoilers :  Things don’t end well for the bad guy, and the DB5 gets very badly scratched – I cried so hard I needed fresh popcorn.

Bond will return. We have all the time in the world…