This documentary mixes interviews and dramatic recreations, to tell the stories of two characters who occupy significant, but largely over-looked, roles in genre cinema. Chronologically, first is Rondo Hatton, a journalist turned actor who suffered from acromegaly, a disorder which distorted his features, and led to roles in horror movies with titles like The Brute Man, before his death in 1946. The other topic is Robert Burns. No, not the Scottish poet, but the art director on films such as The Texas Chainsaw Massacre and The Hills Have Eyes, whose attention to detail and prop design was a significant part of those movies’ creepiness. Burns, who died in 2004, was a fan of Hatton to the point of near-obsession, and the movie seeks to reveal the truth about both men. 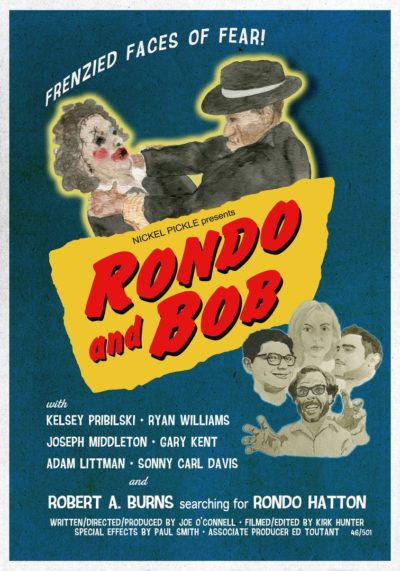 The best sections here are interviews with those who knew them, e.g various member of the Chainsaw cast, which shine a light on their personas. Perhaps the most significant comment is the suggestion that Hatton looked weird, but was normal inside, while Burns looked normal, but was weird inside. That contrast perhaps explains why Burns was so fascinated by Hatton. Due to the amount of time which has elapsed, it was obviously much easier for the film to find people who knew Burns, and there’s a lot of interesting information about the importance of his role in the projects he worked on. His talent for creation on limited resources was clear, perhaps no better demonstrated, than by his use of a fur coat and some bowling pins to create a dead dog!

However, the good work done here is severely negated by the dramatic recreations, which are clunkily staged and almost entirely unconvincing. The dialogue in them is particularly stilted, sounding as if written by someone whose knowledge of the era was limited to pulp novels. Given these are heavily used to tell Rondo’s story, his section is particularly under-served, despite decent prosthetic work used to transform Middleton into Hatton. There’s a gentleness there which is almost endearing, for example, as he meets his wife-to-be (Pribiliski)  for the first time. Then they open their mouths and the illusion is, sadly, shattered.

I do wonder if the film might have been better served by concentrating entirely on Burns, with his Hatton fandom being reduced to one aspect of his life. As mentioned, Robert would have been the easier topic, and would definitely have benefited from a deeper dive. Though it seems, psychologically, he had difficulty forming and committing to relationships, according to his brother. As is, this feels a bit like The Sparks Brothers, in that you get a surface sense of the subject, without apparently ever reaching their true core. Even the archive footage of interviews with Burns reveals little more than a very private man who kept his cards close to his chest.