I’ve drifted in and out of an appreciation of Sparks, back to their initial appearance in the British charts with This Town Ain’t Big Enough for Both of Us in 1974. I definitely liked their early synth-pop phase under Giorgio Moroder at the end of the seventies, but they then largely vanished from my consciousness until Gratuitous Sex & Senseless Violins in 1994. I still recall my teenage daughter’s utter befuddlement at hearing “I Thought I Told You to Wait in the Car”. But it’s impossible not to admire any musicians who are now approaching fifty years in the business, have re-invented themselves in chameleon-like fashion on multiple occasions, and persisted in doing their own thing, regardless of commercial success. 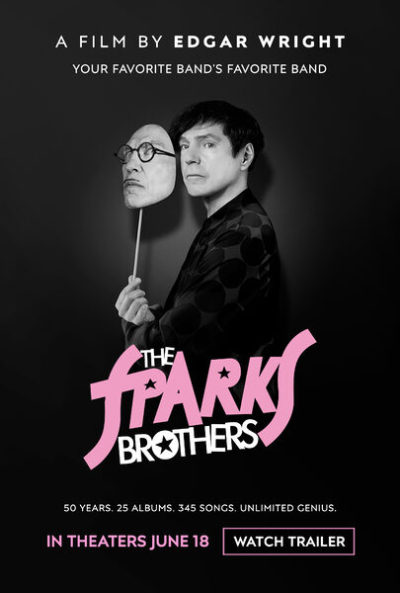 Edgar Wright’s documentary about them is a bit of a chonker, coming in at 140 minutes. Though given the length of the band’s career, length is perhaps to be expected; it works out at less than six minutes per album. While the need to cover all of them is laudable, I’d have skipped some entirely, in favour of the more significant ones. Though my main complaint is, I wanted to hear more from the band themselves, and less from unconnected people. I don’t give a fuck what Patton Oswalt or any other of Wright’s celeb pals have to say about… well, anything, but Sparks in particular. There’s precious little Mike Myers can tell me about Ron and Russell, which does not translate into a loud buzzing sound in my ears.

On that basis, it feels like a great 90-minute documentary, though even at its extended length is never boring. I came away in particular with a new appreciation for Ron Mael’s lyric writing. I never knew, for example, that Girl From Germany is about a man bringing his girlfriend home to meet his Jewish parents. Taking that topic and turning it into a pop song is genius, and Sparks have always had that ability to pounce on the least promising of topics and turn them into magic. Delving deeper into this kind of thing would have been welcome. Instead, there’s a comment near the beginning, “They are a band who you can look up on Wikipedia, and know nothing” – much the same can perhaps be said about this film.

It manages to be shallow, yet the subject matter remains fascinating, because Sparks themselves are such a contradiction. They’re clearly smart, yet revel in songs called “Balls” and “Tits”. They can write about the perils of beauty worship (“Funny Face”), then turn around and perform “Throw Her Away (And Get a New One)”, which opens “Just like everything else in this world/Time wreaks havoc on every girl/What do you do?” Serious? Joking? Half-joking? Their impenetrability is legendary, and making a near 2½-hour film on them would seems a hopeless endeavour. Wright can only be applauded for trying, and probably should not be blamed for the likely inevitable failure to reach anywhere close to the core of his subjects.