I think FearCon is contractually obligated to include at least one rural nightmare each festival, in which townies get terrorized and brutalized by the residents of the countryside. This tradition goes back at least to 2012 with Inbred, and was sustained last year by Butchers. For 2021, the closest submission was this, in which upstate Michigan joins Northern England and Canada, on being crossed off our list of potential holiday destinations. The victims here are the Vanderbilt family, who have headed up from Detroit for the summer, in part to get rebellious daughter Cassie away from her friends, who are seen as a “bad influence”. Cassie is not happy about this: and having had one of our own for a bit, we must say she nails the surly teenager thing very accurately… 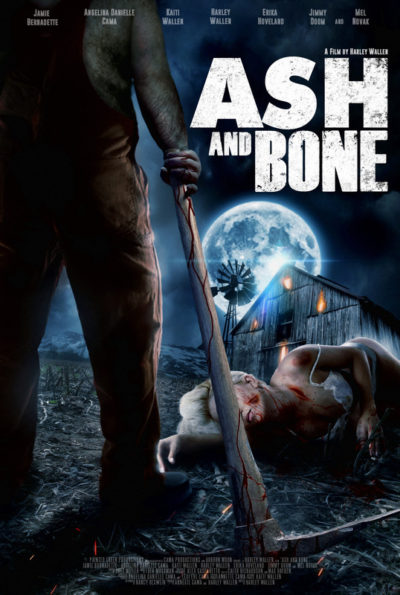 Cassie finds some new friends, and against their better judgment, convinces them to go urban exploring in the local horror house, about which all manner of scary stories and rumours circulate. Perhaps related: the local bar has a lot of fliers about missing young women (which seems very community-minded, I feel). The truth is even worse, as Cassie and pals find a real murder mansion, complete with snuff videos, before having to make a quick exit after the residents, Clete McKinley (Doom) and sister May, come back home. The McKinleys realize they’ve been invaded, and begin working their way through their unexpected guests. Cassie quickly realizes the killers have friends in authority, allowing them to operate in impunity, so she and her family are now in dire peril.

In terms of graphic gore, this actually possesses greater restraint than its predecessors, which wallowed more or less gleefully in slaughter. Ash heads for the psychological unpleasantness, and benefits from the performances of Doom and Hoveland as the villains. They make a truly repellent duo, as much for implications as anything explicit; I got the definite feeling their relationship may be more than fraternal, if you know what I mean, and I think you do. Basically, my flesh started crawling just about any time they were on screen, and this helped overcome some of the (largely superfluous) scenes of family drama. For instance, I don’t think I really needed Mrs. Vanderbilt complaining about the gun her husband had bought for protection, though I did laugh at his city ways when it came to purchasing said firearm.

Things proceed along a fairly linear route, towards the expected finale, in which the McKinleys pay a visit to the Vanderbilts, and Cassie’s anti-social tendencies and refusal to give a fuck, become positive – or, at least, useful – traits. I found myself warming to her Goth sullenness over the course of proceedings, and if there’s nothing particularly original here, it hits the expected marks with energy, and is technically adept to boot. When you see Mr. Vanderbilt chopping wood with an axe, you just know it’s going to be relevant later, and the film does not disappoint.