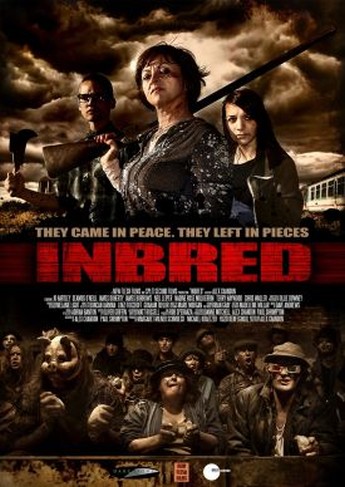 Four “troubled youths” and their two care counsellors head off for a weekend of team- and character-building in the remote Yorkshire moors, much to the chagrin of the kids, who are unused to the countryside, being separated from their mobile phones and having to interact with normal people. Not that there are exactly many of those to be found: it’s not long before they encounter the locals at the neighbourhood pub, ‘The Dirty Hole’, and the landlord, Jim (O’Neill). Oh, he seems friendly enough, though his home-made pork scratchings have an unusual flavour, and the rest of the folk appear to have been wading in the shallow end of the gene pool, if you know what I mean. The next day, the group set out for their work in a yard of abandoned railway carriages, but a noble, if misguided, attempt to stop an apparent case of animal cruelty leads to a confrontation, and things then rapidly escalate from there. The residents clearly have little patience for outsiders, and have a particular way of dealing with them, turning their deaths into Grand Guignol theatre.

Wow. Alex Chandon is one sick little puppy. That’s clear from the get-go, which will have you wondering whether you are watching the wrong film…for about 90 seconds. After that, things calm down in terms of manic slaughter for a bit, though there’s no shortage of unease, and bad enough signs that you’ll find yourself yelling “Get out! GET OUT!” at the screen. Of course, they don’t until it’s just too late, and from there on, this plays like Frontières or Sheitan, directed by the League of Gentlemen. To some extent, it becomes an exercise in spotting references, and criticism of it being derivative is fair enough: you’ll be able to see any number of other influences, from the nude organist of Monty Python, through to Texas Chainsaw and even Todd Browning’s Freaks [with one of the yokels being played by Thalidomide-affected performance artist Mat Fraser]. But there’s still plenty of originality on view, and the technical skill on view is remarkable, especially given almost all the effects are in-camera rather than CGI – you’ll find yourself rewinding more than once to see if you can spot the join. And you won’t.

We actually were genuinely surprised with the level of performances, which can often be over-looked in this genre – it’s probably the biggest improvement over Chandon’s previous work. Hartley, as the rather more sensible counsellor, initially seems like a soft touch, but the more things disintegrate, the greater the degree of steel shown by her character. However, it’s O’Neill who steels the show, sliding effortlessly from the group’s friend to their nemesis with one swipe of the cleaver, when all around him are chewing it up [justifiably, admittedly]. He certainly deserves to stand alongside Brian Glover from American Werewolf in terms of great pub landlords in the history of British genre cinema. Between this and The Holding, the line “It’s grim up North” seems to have been particularly appropriate at this year’s FearCon…