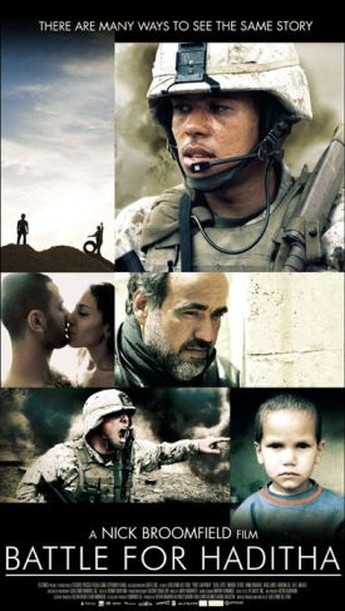 War is hell, and there are no heroes. That’s the message here, as we see all three sides of a bloody incident in the Iraqi town of Haditha in November 2005. Insurgents set off an IED by the side of the road, as a US convoy is passing, killing one soldier and injuring others. Corporal Ramirez (Ruiz, an actual former Marine) engages the attackers in a firefight, but after they slide away into the maze of houses and streets, he continues to press the attack, which escalates into a massacre of the civilians unfortunate enough to be in the area. But, as important as the actual battle itself, is the lead-up, where we experience the everyday lives of soldiers, locals and those plotting and waiting to carry out the attack – there are no heroes or villains here, and the overall tone is terrible sadness at a situation that has next to no possible satisfactory resolution.

While a drama, Broomfield treats this almost as a documentary, shooting with a lot of hand-held camera, and reacting to what goes on, rather than directing it conventionally. It’s obviously a genre in which he’s more than comfortable, and the results are generally very effective. There are some doubts about the veracity of the incident described, to the extent that, while charges were filed against the soliders allegedly involved, they proved too difficult to prove, for a variety of reasons, and no-one was convicted of the killings. There’s no such doubt here, but the film does provide mitigating circumstances, in the stress under which the troops are operating. Broomfield also does a good job of humanising both the victims and those who carried out the IED: it’s a film unlikely to go over well with military supporters, however, not least for its demonising of those who sit in HQ and order killings via their computer monitors. Things are a lot harder for those on the ground, Broomfield clearly points out.