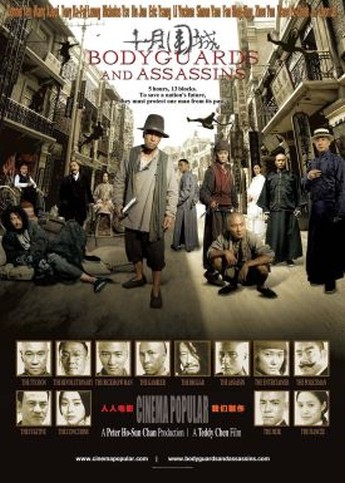 In 1905, political activist Sun Yat-Sen is preparing to return to Hong Kong, for meetings crucial to his plans to instigate a revolution against the corrupt forces of the Chinese dowager Empress. Needless to say, she is none to happy about this, and sends out assassins to make sure that Sun doesn’t leave Hong Kong alive, and also to take out other dangerous malcontents. Knowing full well this is likely to happen, Sun’s supporters, led by businessman Li Yutang (Wang) and newspaper publisher Chen Shaobai (Leung), set in motion their own plans to protect their leader, regardless of the cost. This end brings together all manner of working-class heroes, from a rickshaw driver (Tse) through a beggar to a gigantic “stinky tofu” seller, played by the first Chinaman to start an NBA game, Mengke Bateer. Once Sun arrives in the British colony, the police withdraw, under orders, and the stage is set for battle on the streets.

I enjoyed the epic aspects of this a lot, though at times felt like I needed a scorecard to keep track of who was who. It may or may not help that there are a lot of famous names in minor roles, right from the guy whose assassination in the opening scene gets things going. [I won’t reveal specifics; if you’re a fan of HK cinema, the fun is in spotting them, and if not, you won’t care]. However, if the first hour is largely action-free, it still passes the time enjoyably, with a nice mix of scene-setting, drama and occasional bits of humour. It is, however, the second hour where that all pays off, in what amounts to a single, extended action set-piece. Sun’s arrival and shepherding from destination to destination becomes a mobile war in the urban canyons of Hong Kong, as the Imperial forces are unleashed. And you know all those people you just spent time with, learning about their lives and loves? Let’s just say, I hope they didn’t make any long-term plans.

What’s particularly enjoyable is the variety of action on view, because there is no obvious ‘star’, whose style inevitably becomes the central focus. It’s truly an ensemble piece – maybe the Hong Kong equivalent of The Expendables, though lacking any self-referential conceits – and that’s reflected in an entertaining mix of segments. There’s no doubt this cost a lot to put together, with the reconstruction of turn of the century Hong Kong a remarkable physical accomplishment. If the politics and resulting melodrama are likely simplistic (for propaganda purposes, I suspect – you’re hardly going to get China to let you make a film like this otherwise), you can’t deny the quality or effort put into this.