It’s a nice concept here, best summarised as “Night of the Sleeping Dead”. If you fall asleep, you go into a homicidal rage, attacking anyone unfortunate enough to be in the vicinity. In this case, that would be Edgar (Reick), a mid-life slacker, divorced from his wife, Ady (Russell), and living a rather slobbish life. Then, a bizarre sound anomaly is heard along the entire Eastern seaboard, and appears to “reprogram” the brains of all who heard it. An unprovoked attack from a neighbour begins the process. Before the night is over he, along with his Mom (Boscov), Dad (Quintana), Ady and a couple more neighbours, are embedded in Edgar’s basement, mainlining coffee and trying to stay awake.

If the set-up is almost pure Night of the Living Dead, 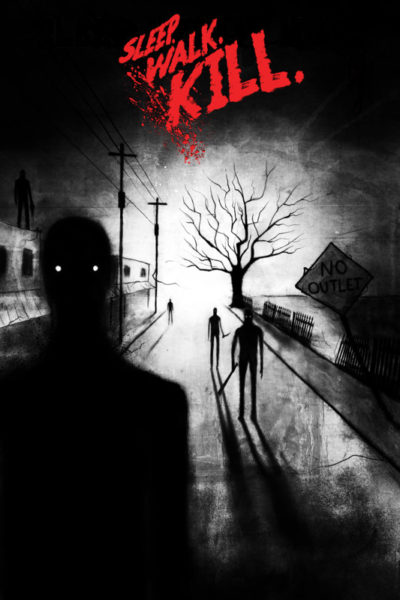 I have to wonder if the name of the hero is a nod to Edgar Wright, for there feels like a distinct similarity to Shaun of the Dead. A basically useless hero, trying to rescue his ex in an urban apocalypse, and forced through circumstance into close proximity with his parents, as well as others with whom he’d rather not associate. It’s a damn high bar at which to aim, and probably no surprise that this falls short in all areas. Reick < Simon Pegg. Russell < Kate Ashfield. Boscov < Penelope Wilton. Quintana < Bill Nighy. Russell and Quintana probably come off best, projecting a likable personality and calm knowledge respectively into their characters.

That’s less so for Edgar who, especially early, comes off as a dick. While this may be deliberate, I still found it a bit of a turn-off. The other problem is, the threat turns out to be considerably less than expected. Partly, it’s a numbers thing: they’re hardly under siege, with a couple of passing sleepwalkers apparently all to which the budget could stretch. However, a bigger problem is that you can simply wake up people, and they stop being homicidal maniacs. The obvious solution – restrain people before they go to sleep, so they can’t be a threat – is attempted, and leads to subsequent convolutions in order for them still to pose a danger. It would have been far more of a problem for the characters to handle, if slumber was a one-way ticket to Psychotown, with death the only cure.

In the end, it’s just too chatty: maybe Sleep. TALK. Kill would have been more appropriate a title? While that can work, you need to have dialogue that really sparkles, and that only occasionally is the case here. It’s especially the case when your plot involves characters talking about sleep, trying not to fall asleep, and occasionally dozing off. It all seemed to have an almost subliminal impact, for I’ll admit there were occasionally points where I was tempted to join them.