Chris turned to me in the middle of this and asked, “Is this a horror film?”. It’s a question we tend to raise quite often as, despite the name of our event – the clue should be “FEARCon” – we get a lot of submissions which don’t really fit in the horror genre. While we tend to be broadminded about our field, there are still limits. But it’s usually a question which is quite easy to answer. Here? Not so much. It is, for example, almost completely blood-free, until virtually the final shot of the film. Yet, there is a low-key sense of dread present for much of it. The best word is probably “unsettling”. It’s a horror movie in the same sense as David Lynch films, with a perpetual sense that something is Not Right. Capitalization used deliberately. 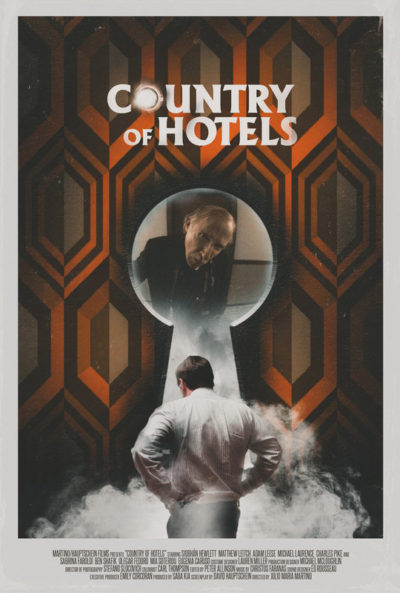 It takes place in a run-down hotel of no specific location, staffed entirely by Eastern Europeans, such as Sammy the handyman (Leitch, top). The focus is on one particular room, #508, which appears to be cursed: a lot of people check in, but nobody ever checks out. Their graves instead seem simply to be added to the backdrop in one of those hotel room paintings. As such, the movie unfolds almost as an anthology, with three stories of the room’s residents. The first are a couple, Brenda (Hewlett) and Roger (Leitch), engaged in an illicit affair that unravels over the course of the night. The second is a nomadic computer tech, Pauly (Leese), whose thin grasp on sanity is stretched beyond its breaking point. The third and last is a musician who got the room’s key from a fan at a gig, and is expecting her to turn up. She does… just not quite in the way he expects.

It’s almost entirely off-centre, from the wallpaper (as in the poster) on down, and the tone is helped by Christos Fanaras’s score, which sometimes sounds like an elevator music version of Goblin. The TV seems to have a mind of its own, changing channels at will. So does the electricity. The staff tread a fine line between over-helpful, creepy and passive-aggressive. Frankly, it’s the kind of place where I’d be checking “Somewhat satisfied” on my customer survey. As a film, it’s a bit uneven, with some sections that work better than others. I think Pauly’s disintegration was the most effective, especially considering it’s basically a one-man show. I thought it ran out of steam towards the end, with some performances which felt OTT, and out of keeping with the overall atmosphere. The last word is probably the most important here. If you’re fine with a film which seems content to deliver no more than that, this is for you. But if you seek more substance to your horror – or even a coherent explanation – this is probably not for you.