Well, this certainly takes the slasher into a new direction. Masked stalker as therapist? That’s… not something I’ve seen before. It may not be entirely successful, yet it certainly puts an original spin on the usual tropes of the genre. Indeed, it also replaces the Final Girl with a “Final Guy”. Roger (Andrusiewicz), who has retreated to his family’s remote cabin, to come to terms with the death of his fiancée, Clara. There, he finds a set of video-cassettes from their earlier trips to the cabin, which reveal some rather uncomfortable facts. Firstly, we see that he is a bit of a dick, to put it mildly – and the more you see, the more you suspect he was involved in Carla’s passing. It also turns out they weren’t alone – and more immediately, Roger still isn’t. He’s not the only one with a camera either. 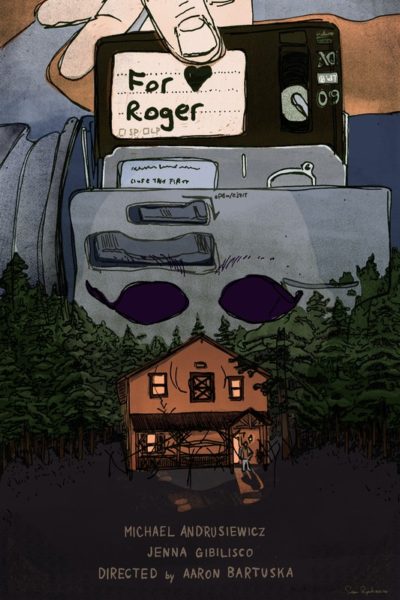 This is very much a slow burn. For much of the first hour, it’s Roger by himself, watching tapes, and it’s about as interesting as someone else’s home movies usually are. Things develop cautiously, such as a brief interlude where Carla reports seeing someone behind a dumpster. This is something Roger initially rejects – as he does just about all concerns his girlfriend expresses, which is a big part of the problem with their relationship. It’s only when he notices someone peering in through the window on one of the tapes that he realizes she was right in her concern, and things quickly escalate from there. Initially, it seems like the usual kind of thing, with the masked, unstoppable killer pursuing Roger through the woods. However, after he’s caught and knocked out, Roger wakens to find himself tied to a chair. His assailant then wheels in the TV and VCR…

It’s this aspect where the film is at its freshest, and consequently most interesting; it’s just a shame it takes so long to get there. In the opening half, it’s more of a relationship drama (strike one!) played out through largely improvised found footage (strike two!), and watching couples bicker has never been must-see TV for us. The introduction of the third party changes the dynamic entirely, and I have to respect the way there’s no explanation offered for his presence. If I’d to guess, I’d say he might be Roger’s guilt made flesh, forcing him to confront his part in events. But it’s very much a party to which you have to bring your own bottle of interpretation. The movie has clearly been crafted towards a low-budget production – basically three characters and a single location – and it’s to its credit this rarely feels “cheap”. Good use in particular is made of the cabin, which appears an ominous setting from the moment we first arrive, and comes close to being a fourth character. If it hadn’t been so back-loaded, it might well have ended up as a selection.