Well, this is certainly… a thing. Writer/director/actress Nekrasova is best known – though I’d never heard of it – for running a political-cultural podcast out of Manhattan called Red Scare, which has had everyone from Alex Jones to Tulsi Gabbard on it. By  what I’ve read, it’s basically adjacent to the likes of Chapo Trap House. And if you’ve never heard of that either, consider yourself frankly very lucky. Red Scare appears to work on the principal of basically hating and mocking everything, so I’m left very unsure as whether or not to take any of this seriously. I guess it does at least create an original mash-up, being the first giallo conspiracy theory movie I’ve seen. 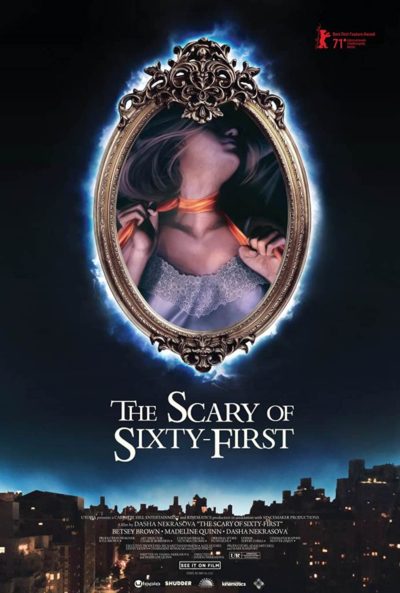 Noelle (Quinn) and Addie (Brown) get a steal on a New York apartment, complete with furniture left by the previous tenant. Sure, there are some oddities, like the way you can only get to the second bedroom through the first one. But, hey: it’s cheap! Then, an unnamed woman (Nekrasova) knocks on the door. Turns out the apartment was owned by pedopimp to the stars, the late Jeffrey Epstein. Ah, that explains the mattress stains. Noelle ends up going down the conspiratorial rabbit-hole with the woman, while Addie appears to be possessed by the spirit of one of Epstein’s pubescent victims. As in #1: growling “Fuck me like I’m 13!” in a demonic voice to her boyfriend (Rapaport), who is understandably freaked out by the experience. It only goes downhill from there. As in #2: masturbating with photos of Prince Andrew downhill. Not, please note, “to”. With.

I must give credit to Brown, because she utterly goes for it with her performance. Watching her fall apart in this way is simultaneously creepy, sad and disturbing. Hunter Zimny’s cinematography and, in particular, Eli Keszler’s score have both been taking copious notes from the work of Dario Argento, and those aspects work well. On the other hand, the movie overall does feel like a hodge-podge of selections from the work of better, more experienced film-makers, also including Polanski and Kubrick [the warning note received at the end is an exact copy of the one Bill gets in Eyes Wide Shut]. These quite drown out Nekrasova’s own voice.

Considerably less successful than Addie’s downward spiral are the conspiratorial elements. I’ve hung out with more paranoid researchers than most, and this feels as if Nekrasova is playing a conspiracy theorist, rather than being one [perhaps tying in with her reputation for 100% snark, mentioned above]. Noelle getting sucked in seemed way too easy; that kind of thing usually unfolds over months, even to those predisposed to believe. The movie failed to bring the audience along with her into the rabbit-hole, something it definitely needed to do. For instance, it never explains the drone footage pored over by Noelle and her pal is of Epstein’s private lair, Little St James in the US Virgin Islands. It’s all frustrating – yet I have to say, I couldn’t look away.