Normally, I write reviews in the order you see them – starting with the rating, then (hopefully!) explaining how I came to that opinion. This, however… I’m genuinely unsure how to feel. So I’m going to see if getting my thoughts down,  will let me come to a conclusion. I must say, the movie includes one of the greatest moments of yanking the reality carpet out from under the viewer, I have ever experienced. This comes at one hour and thirteen minutes in, and is all the more effective, as it arrives immediately on the heels of a twist we did see coming. It’s thoroughly disorienting, turning everything you’ve seen to that point upside-down. Well played, movie. I’m just not sure the rest of the film lives up to it. 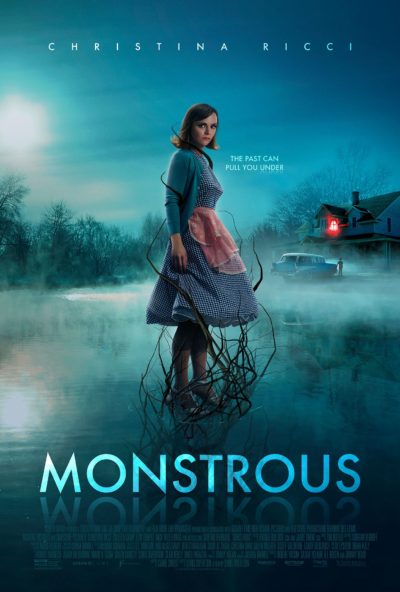 We’re in the late fifties or thereabouts, and Laura (Ricci) is moving from Arizona to California, apparently escaping an abusive relationship with her young son Cody (Barnard). We know it’s the fifties because of the cars, the soundtrack, and that being about the last time anyone in their right mind voluntarily relocated to California. But the question here is largely whether Laura is in her right mind. For it isn’t long before their new home is plagued by increasingly unsettling events. “Something” appears to be lurking menacingly in the lake behind the house, and Cody’s only friend is a “pretty lady”, who may or may not be imaginary, pretty or a lady. Laura’s mental state declines, and she takes to drinking copious numbers of vodka miniatures. Something has to crack, eventually. And hoo-boy, does it crack.

It comes as something of a shock to find Ricci playing a Mom. I mean, she was Wednesday Addams just recently. What? It was over thirty years ago? Nope. That makes about as much sense as this film having forty-one executive producers. I counted, and the figure does not include the co-executive ones listed. Anyway, it’s clear this is part of a dubious recent trend of “horror as metaphor”. The problem with the approach is, such movies typically end up either bring painfully obvious or annoyingly obtuse. For much of the time, this skews toward the latter, matters not helped by CGI effects which seem to have strayed in from a considerably cheaper film.

To be frank, you’d be forgiven for losing interest in this. Then the final fifteen minutes arrives, upending tables and tossing chairs like a gang of drunken football fans. Does it all make sense? I’m not sure, yet the broader picture definitely does make sense [albeit in a way which feels reminiscent of previous, and more successful “loony mommy” film, The Monitor]. It’d likely require another viewing to determine how rigourous the internal logic is here, and as I approach 500 words, I’m still not certain whether I “liked” this, or even whether it was objectively good. Does the berserk insanity of the finale, counter a humdrum opening hour? I’ll cautiously say “Yes,” with that one moment of delirious reversal, making the time spent worthwhile to me. Hence:

The film is out in cinemas and on-demand now.