Disclaimer: This has no English credits: the IMDb lists only three actors, without giving character names; and there is little other information online about it (Google currently states, firmly but incorrectly, the movie is Hindi). All information which follows, needs to be taken as a best guess, e.g. casting being done by trying to match actor photos with roles. It’s almost like a flashback to the heady days of HK film fandom before the Internet. All you knew about a movie, was whatever Rick Baker said as he was flogging you a dodgy VHS copy of it, at the Scala Cinema for twenty quid. The accuracy of his statements could not be questioned.

That aside, this is an enjoyable blast, and one of the rare Chinese Animal Attack movies which could potentially work without the monster. Hero Pei Yuan (Suen) developed an understandable fear of snakes after watching his father be killed by a giant one as a child. This is unfortunate, as in order to win the hand of his one true love, local chief’s daughter Xiaoqiu (Jian), he must become the village’s Serpent King. Worse still, Xiaoqiu is responsible for the accidental death of a tax collector, something the villagers agree to blame on the monstrous reptile. Except, the local tyrant – also the tax collector’s father – now demands they bring him the snake responsible, or all residents will be buried alongside his son. 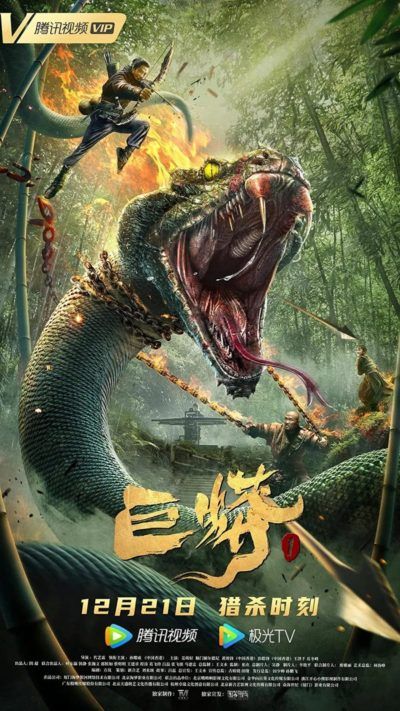 Early attempts do not go well, shall we say. The director uses his beast relatively sparingly, and it’s not for the usual reason of the FX being a bit crap. Although some others here are – there’s a tiger which appears to have strayed in from a video game – the snake is quite good, especially in the way it interacts with the humans. It strikes, grabbing its target, then pulling them back, in a way that’s more impressive than most. This is particularly the case in the villagers’ first foray, a well-filmed sequence to a jungle shrouded in mist, where they are picked off to their increasing terror, before having to beat an unceremonious retreat.

Pei is going to need to overcome his phobia, and learn how to operate his father’s weapon, an industrial-sized crossbow, to overcome his nemesis and win Xiaoqiu’s hand. The route to that point is pretty lethal. As well as the mist massacre, the townsfolk make the ill-advised decision to take back a giant snake egg, hoping to appease the tyrant with that. He is unimpressed. And so is Momma Snake. Between the pair, they reduce the population of the village to about forty by the time of the final battle. Part of me thinks the locals would have been better off handing Xiaoqiu over to begin with. However, such pragmatism would have robbed us of a rousing final battle, in which Pei faces his fears, and we discover that large reptiles can be surprisingly flammable.