Is this a film? A documentary? Some warts and all intimate portrait? A revealing insight in the form of a docu-drama? Or all of them?

I watched this film twice, about three weeks apart. The first time just to watch, enjoy and not review, the second time because I couldn’t get it out of my head and so thought to review. The result was three sides of A4. It’s that kind of a film.

It’s also a film where pretty much nothing happens. So, if you’re looking for overt action then avoid and stop reading now.

Not for the first time in a review let’s start at the end. The end credits to be specific, as these set the scene far better than anything I could write:

Is this a film or a portrait? Whatever it is, it’s told patiently. Slowly if you will. The story reveals itself slowly. Nothing’s explained. It’s played out in front of you to piece together bit by bit.

This was a difficult film to write up and so instead of trying I’ve transcribed some of the notes scrawled as the film unfolded. Which means that this may make even less sense than normal. (Sorry Jim!)

Do note that the end credits were skipped first viewing, so here’s what was scrawled before learning about a cast filled with non-actors.

“They put a plate in my head.”

Brady is waking up with his family, drunken father, dead mother and autistic sister. And then his friends arrive. 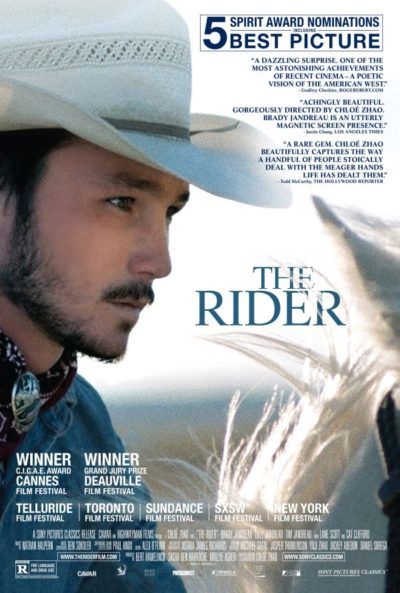 “Ya gotta make sure this head of yours doesn’t get you scared. I know how that goes with some guys, they get scared to get on again and then they become farmers.”

It feels a long film because of the pace. Slow. So relax and let it permeate. Let it unfold. Pretty. Peaceful. Are they acting or telling us about their lives? About this life, the life of a rodeo rider. The lives of people working with and tending for horses.

Lane Scott. Before. And after. Real scars on display here. Too many. Painful. Funny. Devastating. Kind. Humane. Dreadful. Sad. Spirited.

So, what’s the film about? Well, it’s an inflection point. A young man confronted with mortality. Needing to choose. Choosing to choose. Finding out how and why to choose. Ordinary lives. Ordinary. Simple. Unclean. Complex. Linear. Boring. Messy. Life.

“…a lot of times, you get hurt, but, you never think you can get hurt like that…”

Delusional. Self delusional. Because they have to deny what’s there in plain sight and what life can hold for the unlucky or unwary.

Beautifully shot. Simply told. Beautiful! The horse training session is wonderful. Touching. Intimate. This is about relationships. All of it. And about growing. Up and together. And acceptance. Of what is and what can be and what can’t.

“You can’t afford another head injury. No more riding. No more rodeos.”

The mundane spelled out, played out. It’s compelling. A window into a pivotal moment in a life of a young man whose future has been taken away.

“Some dreams aren’t meant to be.”

This is a film about life.

It really is that ‘simple’.

There are more notes, but it’s gone time to wrap up.

I cannot recommend this film highly enough. It feels longer than its one hundred minute running time, in a good way. Many will perhaps not enjoy it. I can only say that I did. A lot. I also like Marmite. And Twiglets.

I also strongly suggest that you do no (further) research on the film before watching. Let it catch you out as it did me.

As for what the film is. Well I’d say that it’s both a film and a docu-drama, albeit one that’s only loosely based on real events. That’ll make more sense once you’ve watched the film.