This is basically a Norwegian kaiju movie, with everything that implies, though you can certainly chuck on a handful of seasoning from King Kong too. Indeed, you could spent the entire running time of the film calling out the previous movies from which this “takes inspiration”. Outside of the obvious Scandinavian folklore inspiration, there’s precious little here which is original, even if it’s assembled with the efficient and cold-hearted precision of a Volvo estate. Oh, wait: they’re Swedish. Never mind. As in the Japanese (or even Hollywood) takes, the humans are the weakest and least interesting links. Yet they get the great bulk of the scenes.

It effectively begins with construction work for a railway releasing a creature from under a mountain where it has been entombed. Perplexed, the government bring in paleontologist Nora Tidemann (Wilmann) as an adviser, unaware that – and what are the odds? – her estranged father Tobias (Eidsvold) happens to be the country’s foremost expert on trolls. Which is exactly what the monster happens to be. Together with sympathetic civil servant Andreas (Falck) plus sympathetic/hunky soldier Captain Holm, she has to counter those of other opinions within the government. They naturally want to destroy the troll, before it can destroy Oslo. Never mind the well-documented ineffectiveness of conventional weapons against the target. Shame the Norwegian nuclear weapons program never amounted to much. OR DID IT???? 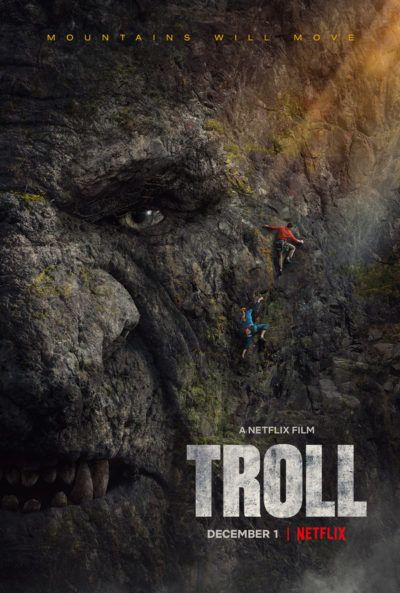 The film makes a strenuous effort to portray the troll sympathetically, and that’s where the Kong influence is most apparent. He (and I apologize if I am assuming the troll’s gender; its preferred pronouns are unclear) is depicted as being a victim of medieval Christianity anti-troll bigotry, and also the last of his kind. Except, the sequel leaning final shot completely skewers the latter element. I also have to say: those primitive medieval folk clearly had far less problems killing entire packs of trolls than the 21st-century Norwegian military had, dealing with a single one. The effects are mostly solid, as you’d expect from the director of The Wave, and occasionally better. There’s not enough of them though, and it doesn’t help the movie seems to lean heavily towards a nocturnal version of the monster.

It’s no Trollhunter, that’s for sure. While clearly made on a far greater budget, this lacks the originality and also the heart. It’s these two elements which tend to make the best kaiju films stick in the mind, and this scores poorly in both categories. After a promising start, it’s one of those movies whose rating ticked steadily down over the course of proceedings, the more it became clear there wasn’t a lot here, beyond an impressive level of technical execution. It’s disappointing, as the trailer looked considerably better than the generic Netflix Original which showed up. When that sequel leaning final shot showed up, it provoked no excitement at all. Let me know if it’s going to be Troll vs. Mothra though.